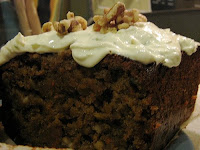 Success! I made a carrot cake from my Jamie Oliver cookbook! This is not exactly the recipe, because I made lime frosting (swap out orange for two limes in the frosting recipe), but it's otherwise the same. Note: I confess. While this IS a picture of the carrot cake in question, it is not MY carrot cake, nor MY photo. Bless you Flickr, Bless you Google.

However, I think I should have stuck to the recipe from BBC Good Foods, because it was a LOT easier looking and probably wouldn't have given me such a headache.

Examples:
1) Jamie says beat egg whites until stiff and fold into cake batter.
BBC says mix eggs with oil and add to batter.
Note: I am notoriously lazy when it comes to holding a beater into egg whites. I am also VERY heavy handed when it comes to "folding" said egg whites into batter. That being said, I find it ridiculously easy to separate eggs. My mother always panicked when it came to this. She even had one of those little egg separators that could do it for you (if you could just crack and pour the egg into the little cup without bursting the yolk). I can use the shell or my hands, if I have a shell that busts up the wrong way.

2) Jamie says use self-rising flour.
BBC says use regular flour.
Note: I have NO idea what self-rising flour is in Danish, so I make my own. The recipe is something like 7/8 of a cup plus two tsp of baking powder plus some salt. I just kinda winged it since I needed 1 1/2 cups of flour and I really couldn't be bothered figuring out what 7/8 + (7/8 divided by 2) = X.

3) Jamie says use one cup of ground almonds.
BBC says nothing about almonds.
Note: are ground almonds the same as marzipan or whut? Why, in a country that is OBSESSED with marzipan and making your own food, can I not find ground almonds? I can get chopped almonds. What did I do? Oh, I took my left over almonds from Christmas and beat them a lot with a rolling pin and then because I only had 1/3 of a cup of smashed almonds, I added 2/3 regular flour.

Really, how on EARTH did this recipe come out okay?

In fact, while I did have all of the ingredients for BBC carrot cake, I had to go out and hunt for mascarpone cheese and limes and the never found ground almonds. I also discovered that cream cheese only comes in 200g tins. All recipes for frosting ask for 250g. This is like the hot dog conspiracy: six dogs in a package, eight hot dog buns in a package = you end up buying more dogs and buns as you try to make sure you don't throw away any extra food. I, uh, used extra mascarpone cheese.

By the way, mascarpone - cream cheese frosting is the BOMB! It kicks serious ass. Screw all other frostings, even so-called "butter cream" because this is stuff is AMAZING!

Right, so THEN because I do not have a 9x9 pan, I do some google-math (ask google: how many liters in a 9x9x2 pan) and discovered that I did have a bread pan that could hold ALMOST the same amount. I figured, eh, close enough. It's an odd bread pan, it's made of oven-safe rubber. Which means it's floppy. So it's easier to get the bread out, you see. I was rather thrilled with it when I got it and here was a great chance to use it! (Note: pan may be excellent for bread, which once cooked is fairly stiff, but not so much for cake that stays fairly moist and thus, er, cracks when you try to roll it out of the pan. Just in case you were wondering.) I had to do the lining thing again. I am NOT excited by this part of baking. I mean, what the heck? What happened to butter and flour a pan? Can I do that next time instead of the paper madness? Because lining a rubber pan with paper is INSANE! Thankfully, because of the veg shortening, the paper stuck to the sides of the pan. Which is, I guess, why you have to butter the pan first. But it still seems really very odd to me. And then removing paper from the cake is a bit difficult because you have to roll a warm sticky cake around on your kitchen counter. This is not good for the cake. Or your counter.

Anyway! Having used the wrong type of flour and substituting flour and bashed almonds for ground almonds and my pitiful attempts to fold mostly stiff egg whites (I got bored waiting for the eggs to get properly stiff) into the batter and using a pan that is not quite right and using an oven that is quite wonky - I still ended up with a smashing success of a carrot cake.

Note: The most commonly heard refrain from the test kitchen at the Archaeogoddess Culinary Institute for American Cooking in Denmark: "Oh, f*uck it."

By the by, somewhere there were some expats wondering about refried beans. It was a while ago and darned if I can remember where and when and whom. But today I found the following on my favorite cooking web-site (an all around great web-site, I might add), The Pioneer Woman: a recipe for refried beans, scroll down to February 24th, since she hasn't gotten a special link to it yet. Also, because I am a complete and utter fan of cornbread I also want to share this recipe. I use a slightly different recipe since I do not have a skillet that can go in the oven nor a microwave nor... okay, so I don't use this recipe for cornbread at all, but I am going to give the beans part of this recipe a whirl and make my own cornbread to go with and then if I have left overs I may just make me some refried beans. I don't know yet what to do with that, but maybe I'll put together some pico de gallo and some guacamole and some taco salad and have myself a nice old time pretending that I'm somewhere warm and Spanish.

Provided that I can find a large enough bunch of cilantro (coriander, to some of y'all) to make a PROPER salsa. I am slowly weaning my husband off of the horrific red bottled stuff they call salsa around these parts. I mean, it tastes like they took ketchup, added some boiled green peppers and over salted and sugared it. I only use it for cooking the few recipes that ask specifically for bottled salsa (casseroles and soups). It's horrible horrible stuff.
Posted by Archaeogoddess at 2:34 PM