My Home: enter at your peril...

So lots of "want photos!" come my way regarding the house.  And I ran about taking photos here and there and then there was the usual hysteria on the couch where I tried to figure out how to put all of these in a post that wouldn't be a complete disaster and then it came to me.  Like the Virgin Mary, speaking words of wisdom... only it was Bill Bryson.  Or maybe not, because I haven't actually read the book yet, it being brand spanking new and I not having money for random books of bliss...

I seem to be wandering.  Where was I?

Oh, yes.  We are going to do a home tour.  Room by room.  Or maybe more than one room on some occasions.  Screw it, folks, we'll do as many damn rooms per post as I freakin' feel like, okay?

So without further ado: the entry way.

This is the front door.  Is this not an awesome door??  And yes, my house is yellow with white trim.  Strangely enough, a vast majority of the houses I've lived in have been yellow with white trim.  My mom has an obsession for yellow houses with white trim, especially if they have green shutters.  Someone, please make my mother's day by bringing her 16 green shutters for her house?  Oh, and while you are at it, you may want to finish painting the trim.  Bring a ladder.  Oh, and repaint the house... it's faded a lot over the years.  Especially on the south side, facing the sun.

Going in through this door, which is RIGHT ON THE STREET, because front yards happen to other people not living in this town, you enter my vestibule.

If I were to be staging a house to be sold, I obviously would have cleaned.  If I had not been worried about being hit by a car while I hunkered down on my front stoop to take this photo, I would have at least moved the jackets so you could see the newel post.  You'll just have to trust me that there is a newel post and not a small child under all of that mess.

Anyway, the door on the left leads to the parlor.  Which we just found out will be stocked with a large dining set that we are getting for free from the inlaws.  In fact, all the furniture we had "bought" is now "free" and we aren't paying a dime apart from the cost of getting it from there to here.  Seems that attempts to sell it for a small fortune were undone by a Danish public obsessed with Arne Jacobsen egg chairs, who are all noses up at heavy wooden country-style furniture.  I WIN, Denmark!

The door "straight ahead" is to the kitchen.  Just to the right of that door, hidden by the staircase, is another small door to a tiny bathroom.  Not a half-bath, but one fully equipped with shower.  And hidden closet to utilities.  Oh, and a blocked up doorway to the world's smallest courtyard.  All ahead on "My Home"!! 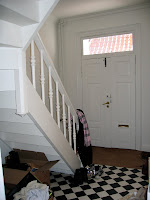 Standing in the door from the kitchen looking back at the door that is now CLOSED!!  You are trapped!!

You decide to approach the tiger saying "nice kitty kitty," wishing you had a steak in your pocket.  Turn to page 83.

You decide to claw at the door and cry like a baby.  Turn to page 15.

You decide that the tiger is a figment of your imagination and stride boldly towards the next door.  Turn to page 106.


I sucked at "Choose your own adventure" books.  I just thought you should know.

So welcome to my home.  Toss your jacket over the rail and kick off your shoes.  I'll bring you a gin and tonic and we'll wander into the next room...
Posted by Archaeogoddess at 9:34 PM 8 comments:

Email ThisBlogThis!Share to TwitterShare to FacebookShare to Pinterest
Labels: Island life, my home

We purposefully set out to destroy a plant in our yard this last week.  We don't know what it is, but it's wicked spiky and it is trying to kill the rhododendron. 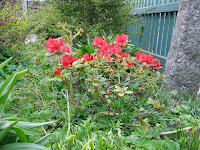 You can't see it in this picture - but it's totally beating the crap out of the rhododendron!!

The spiky plant had to be brought low.  And it was, with help from some garden sheers.  But it will be back, oh yes, it will be back.  I fully expect it to become my nemesis.

There was a plant just like it back in my parents front yard.  Both myself and my sister have tried to kill it.  One time I completely chopped it up, dug down, and poured paint on its evil tap root, all in an effort to poison it completely.  Water-based paint being the most dangerous thing I could get my hands on at the age of 12.  My parents were careful people who were obviously two steps ahead of their possibly dangerous children.

Anyway, the plant wouldn't die and now that my dad has landscaped the yard to the point where we can't get at the Satan Plant, it is happily thriving.

But back to the garden I have now, not random patches of scrubby grass I have had in my past.  The New Satan Plant will continued to be attacked, the rhododendron will be nurtured and I have learned the great secret of gardening.

***SOMETIMES YOU PULL OUT THE WRONG PLANTS***

I would now like to tell you about the lavender plant that I have.  It's not a rosemary bush like I thought.  But I am happy to report that I think it will survive and I'm glad I almost killed it discovered it was a lavender bush before I tried to cook with bits of it.  I'll make sure to say nice things to it whenever I pass by.
Posted by Archaeogoddess at 5:58 PM 2 comments: 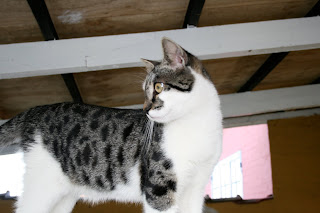 Alot is not mine.
*snicker*
Alot wandered into my back yard the other day *heh* while my husband and I were gardening.  Until this point, he wasn’t known as Alot.  *guffaw*  He was known as the-cat-that-wasn’t-the-ginger-cat-or-the-little-black-and-white-one.  After a five minute description of the cat THAT WE WERE BOTH LOOKING AT just to say, “and he’s very friendly, this cat,” that I suggested we give him a name.
I mean, we simply could not go on this way and the cat was certainly settling into our garden with intent.  Intent to loiter.  Intent on being cute.  Intent on entertaining the Archaeogoddess with his little fuzzy butt antics.
“Why not ‘Alot’,” said my husband, who is still reeling from the humor of Hyperbole-and-a-Half’s brilliant Alot post, even though I read it to him over a month ago.  Mind you, it *is* genius.  I laugh every time I read it.  My husband, who thinks puns are possibly the highest form of humor, secretly harbors a desperate love for Allie.  At least I think he does.  It's okay, I harbor a not-so-secret desperate love for David Tennant.  We all have our little quirks.  Anyway, I suggest you read it, not only because it's ridiculously funny, but also so that you’ll get the ongoing joke in this post and realize that I’m not stupid, I know an a lot from an Alot.
But dude, I’m telling you, we named the damn cat Alot.
*bwahahaha*
This let to all kinds of hilarity in the yard.
“Honey, look, there’s Alot in the car!”
“Is that Alot in your jacket, or is it just happy to see me?”
“Oh my god, Alot just fell into the pond!” 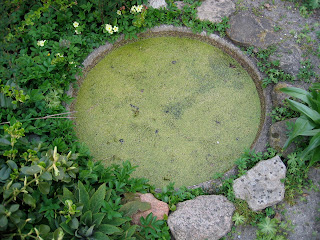 Alas, I didn’t get a picture of Alot falling into the pond.  Even if I’d had the camera and been pointing it his way, I would have collapsed in hysterical giggles without ever firing a shot.
I knew it would happen.  I was pretty sure it was going to happen a few days earlier when Alot and the black and white cat, who has of yet no name but I’m leaning towards “Heck” so I can yell “It’s a Heck and Alot!,”  were bounding around the garden chasing each other, their own tails, and the various flying bugs that frequent my yard.
But nope.  Alot’s downfall came when trying to stalk my husband’s hoe-thing.  Hoes will lead you astray, man, every time.  So while Alot was trying to sneak around behind the Danish Boy, he headed towards that nice flat green patch, beyond which the bushes offered a safe location from whence to pounce.
Imagine if you will, dainty cat feet.  Dink-dink-dinking across the ground.
Dink-dink-pause-dink-dink-pause-dink-dink-plop-plop.
Up to his armpits in algae.
He withdrew to a safe distance to try to salvage his dignity.
And we laughed a lot at Alot.
Yesterday Alot wandered into the house, causing my dear Dane to exclaim, “Alot scared the crap out of me earlier today.”  Today we almost took Alot with us to Århus.  One of the great things about Alot is his ability to do things that let us maximize the punning potential of his name.
He’s obviously not our cat.  He does go home, wherever that is, in the evening.  We don’t usually see Alot out at night.  He’s well fed, well groomed, and very friendly.  He’s not neutered, which I think adds to his roaming nature, but so far he’s not treated our yard like a giant litter box.  As far as my husband is concerned, he’s the best pet ever - the kind that costs nothing and gives you hours of entertainment and joy.
We like him, Alot.
Posted by Archaeogoddess at 7:02 PM 4 comments:

Email ThisBlogThis!Share to TwitterShare to FacebookShare to Pinterest
Labels: and we named him Alot, things that make the archaeogoddess happy

I've been waiting and waiting to use this image (unless I've used it already, but I'm not going to go back through all my posts, no sir-ee-bob) and this is that post.

From Pictures for sad children.  I'm pretty sure John Campbell isn't Danish, or married to a Dane, or have had any reason to sit through a Danish party, and yet he really nails the experience.

This post may be a bit touchy, so I'm putting a break in it - continue reading after the jump.

Email ThisBlogThis!Share to TwitterShare to FacebookShare to Pinterest
Labels: Danish - it's not just a pastry anymore, my Dane

I'm not the only one to see the inherent evil in ducks.

I didn't caption this photo, I swear!

Posted by Archaeogoddess at 3:59 PM 2 comments:

Email ThisBlogThis!Share to TwitterShare to FacebookShare to Pinterest
Labels: random

If I have different favorite colors every few years, does that mean I have schizophrenia?

Totally stole this from All About Me and A Bag of Chips. 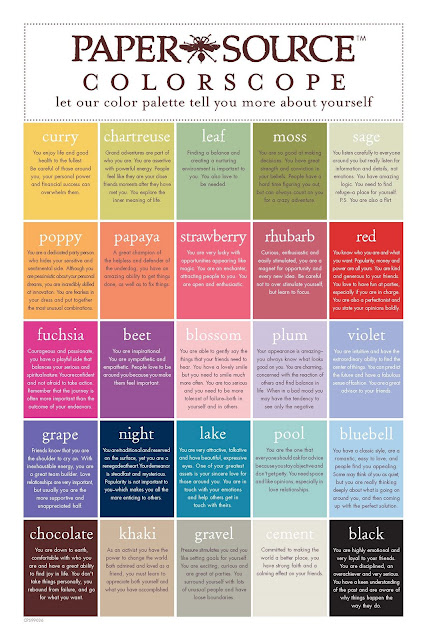 I am very attracted to the color beet - but my toenail polish is currently lake.  Make of that what you will.

Posted by Archaeogoddess at 7:33 PM 5 comments: