Welcome to Denmark: Closed for July

I know people have to take a vacation, but why does it seem that everyone is doing it NOW? Yesterday Thomas and I decided that we really needed some restaurant quality grub, so we went out into Aarhus to find it. Every restaurant (except for a few pizza joints, so not *every*) was closed for holiday. It was surreal. Friday night, 8pm, and very few souls to be seen on the street. What gives? Where are all the Danes? Turns out that it is a domino effect. As a few places close for holidays, people realize nothing will be open, so they go on holiday. As more and more people go on holiday, shops and restaurants discover that business drops, so it becomes the perfect time to go on holiday. Where do they go? Summer homes (very small homes pressed together in specially zoned areas, most Danes can afford them) for the most part. Or they spend a few weeks around the house, fixing things. Meanwhile, those of us who foolishly decided to stay in Denmark in July are left buying ready-to-eat meals in the supermarket. Sigh. They really ought to put a sign at the boarder, "Welcome to Denmark: closed for July".
Posted by Archaeogoddess at 10:46 AM 2 comments: 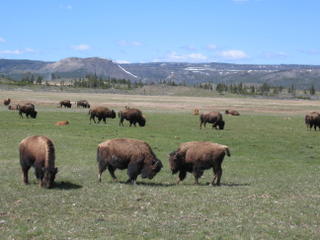 Musings of a conspiracy nut

I love my boyfriend. He is the light of my life, apple of my eye, and the conspiracy nut in my mixed-nut can. As an avid terrorist watcher (hey, some people watch royals, others keep up on terrorist bombings) he has noticed that certain groups tend to "commemorate" special days by blowing themselves and other people up. It's not just him doing this noticing, it is a national pastime in Israel. So of course, with the most recent bombing in London, the pattern loving half of his brain began calculating. The following is the revised (do you really expect me to remember verbatim?) transcript of the conversation.
T: There is a pattern between bombings, groups like this are obsessed with numbers.
E: What?
T: Really, there is a thousand days between 9/11 and the Madrid bombings.
(delay as Erin does some math)
E: No, there are 912 days.
T: See! Wait, not 911?
E: There would have been 911, but 2004 was a leap year, you have to add an extra day in Feb.
T: So there were 911 days between the two attacks.
E: Or if the so-called mastermind behind it wasn't smart enough to add that extra day, he would have thought that 3/11/04 *was* 911 days later.
T: Um-hm, see. There is a pattern. Now how many days were between Madrid and London.
(delay as Erin does some more math)
E: 455.
T: Ah-ha, and if you divide 911 in two what do you get? (Thomas is much faster at math then me)
(delay as Erin uses her calculator)
E: 455.5... Oh weird.
T: Ah ha, see!
E: Okay, so it is weird.
T: So if it is half of 911, then what is half of that?
(again with this math stuff)
E: 227-228 days, meaning that the next bombing, assuming that your conspiracy theory is right...
T: I'm not saying it is right, what if they set up a pattern so we all get hyped up and then they strike on a different day!?
E: (long look)
T: (innocent look of someone convinced that "they" are up to no good, but glad he knows that "they" are up to no good)
E: February 19 or 20 2006. (sudden dismay) Oh that's no good.
T: What?
E: That falls during the winter Olympics. Which this year, is being held in northern Italy. Italy, coalition member.
(meanwhile on news they mention the Bali bombing)
T: And what are the days between all of those bombings.
E: (grumbles) Wait a minute, this is hard. (muttering) Thirty days have September....
(long delay as Erin does math)
E: 397 days between 9/11 and Bali. Or one year, one month, and one day as previously noted on the news. 515 days between Bali and Madrid. No pattern.
T: Yeah, but one year, one month and one day? That was definitely by design.

So conspiracy? Are mathematician Islamic extremists hard at work cranking out numbers to make their explosions more meaningful? What about the G-8 conference in Scotland and the announcement that London would host the 2012 Olympics, is it just a coincidence that these things just happened to come at the same time as this mathematical equation demands a bombing? Or are we, pattern seeking creatures of habit, desperate to find a pattern, to be able to predict the next wave of horror?

Alas, since I live with a believer, we shall not be going to Copenhagen those days in Feb. or is it likely we'll go to the Olympics. But then, as my devils advocate side argues, does not going validate the terrorists plan to strike fear in the hearts of the common person? Does not going because of a crazy whim (aka complicated mathematical formula) let the terrorists win?

Meanwhile, would anyone like to open a macabre betting pool: Where and when will the next terror attack in Europe take place?

As a blogger, it is up to me to correct myself when I am wrong. So I must update my previous blog - there was apparently a much larger protest in Aarhus. An eyewitness's account was 30,000 people. News reports say "hundreds." I saw 5 people with banners and 2 news cameras. In the end it doesn't really matter because Bush saw zero people holding zero banners. And I can't seem to find out where to get those really awesome anti-Bush t-shirts! Grrrr.
Posted by Archaeogoddess at 12:15 PM No comments:

Something rotten in the state of Denmark...

Sorry for the bad Shakespeare, but since this will not likely show up in American news, I thought ya'll might be interested. Dubya made his first trip to Denmark yesterday (he will stay throughout today and tomorrow head off to the G-8 summit in Edinburgh). This makes him the second office-holding president to visit (Reagan visited after his two terms, Clinton visited mid second term [to rave reviews, I might add]). The joyousness of this occasion was illustrated in a minute by minute report on DR 1 (one of Denmark's main channels). It covered from the minute Air Force One landed to when the Pres. arrived at the Prime Minister's home a half-hour's helicopter flight north. DR 1 reporters had flown the same route earlier so they could show exactly what the Pres. could see ("look, Lars, he can see our house!"). They then did a lovely second by second commentary on the landing of the first helicopter ("and now we see the tree branches moving due to the wind caused by Marine One!") only to discover the first helicopter was a decoy, Dubya landed in the second. There was a band and lots of reporters, but not a regular Dane (think Lars Svendsen aka John Smith) in the crowd. All well-wishers or otherwise were kept to the town and away from the manor house. As per usual, Bush will not be exposed to people who may actually disagree with him.

While most Danes are either moderately for or against Bush; more against, but without a great deal of hatred, this visit is important to Danes because Denmark is involved in the war in Iraq. Also, as a small country, it is always nice to be recognized by the so-called leader of the free world. And despite what looked like hero-worship on DR1, a hard-hitting reporter did grill Dubya on many of the issues Danes are worried about. Namely the war. Which gave Dubya a chance to AGAIN play the 9/11 card. Anyway, there *were* a few protests to the Bush visit. Thomas and I were lucky to catch the Aarhus protest. Five angry Danes, followed by two news cameras, walked around the pedestrian-only streets waving banners and chanting. This was in turn ignored by most people.

For the most part, Danes follow the adage: love the people, dislike (or even really really dislike) the war-crazed leader those idiots re-elected. As an American, I am often called to comment on American politics. But this is done without malice or disdain. They seem to recognize that not all Americans voted for this turkey and even recognize that the general American public was lied to regarding the war, resulting in people voting for rather than against Dubya. Perhaps because they too were talked into this futile war. Or perhaps because Denmark has very strong ties to the US. It is Denmark, tiny and often ignored, who holds the record for oldest and biggest American Independence Day celebration held outside of the US.

So the Danes shake their heads and continue to welcome American visitors with open arms. Viewing the US as that crazy younger sibling who gets up to no good from time to time, but gosh, you still have to love them, they're family after all.
Posted by Archaeogoddess at 1:05 PM No comments:

CPR is more than cardio-pulmonary resuscitation!

Denmark - the welfare state. For those of you who have been begging the US for national health care, no one does it like the Danes. Take for instance my case. I am in Denmark on a student visa for a year. Well, if you are going to be in the country for that long and you have a visa you can sign up for a CPR number, which is like our social security number, but way more cool. Your CPR number allows you to check books out of the library, get a bank account, and gives you access to free health care. Yes, FREE health care. I don't pay taxes, I could vote if I wanted to (another perk of the CPR number), and should I break my leg I am fully covered. Thomas points out, with just a hint of sarcasm, that this is what his 50% income tax goes toward, insuring poor guest students, among other things. Me, I am just so proud to be part of this welfare state, where I don't have to put anything in to get something out! Of course, Denmark will not be able to keep doing this forever, more than half of the population doesn't work (that's not a 50% unemployment rate; this includes children and retired persons) - meaning that one half supports the other half. Eventually something will have to give. But until that day happens I will relax knowing that my ass is covered, for the moment.
Posted by Archaeogoddess at 10:44 PM No comments: