My brief flirtation with wildlife photography

My Dane often does not understand me.  He's entertained, most assuredly, which works for me, because then I have someone to vacuum my floor and wash my clothes and remove spiders post haste and I can always say "yeah, but I make you laugh" when questioned on my usefulness.  But frequently he's left standing on the sidelines while I make a run for the crazy.  At least he cheers me on.  I should buy him pom-poms!

Anyway, yesterday I saw Alot in the yard, sunning himself on this random cement table-like thing in the garden.  I call it table-like because it's small, in front of a bench, but has this weird circular cup in the center.  Like I should put a potted plant in it.  Only that would be stupid, because then when you sat at the table you'd have a face full of plant.

Oh my god!  I know what to do!  I need a small palm tree.  Because then it would be a face palm!

Hey I'm laughing - and like they say, "laugh and the whole world laughs with you" - so laugh people!  I command it!

Ahem, as I was saying...  Alot on the table in the garden.  But I had NO camera.  This was the problem outlined in the previous post.  But I am SO DETERMINED to be a wildlife photographer I grabbed my computer and tried to use the built in camera to take the picture. 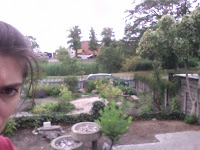 It didn't work.  Look at my frown on concentration, though!  And the weird thing is that this camera takes pictures backwards.  That's my garden in reverse.  And my left eye, not my right.  I noticed this first when I was trying to photograph myself with a hand written sign.  I had to write the damn thing backwards.

Somebody is going to point out that I could have popped it into iphoto or picture viewer and flipped the photo around.  Yeah, I know that NOW, where were you when I was carefully writing backwards!! 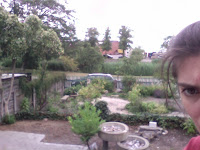 See, I *can* do it.  Not the writing backwards, the flipping of the photo!

What was I talking about again?  Oh yes, Alot.  Not really visible in this photo.  Note to Apple (© ™ ® and maybe §) - could you all make a zoom feature on your little camera thing?  Or you know, send me another digital camera.  One with video, cause that's really handy to have when you are at the Dead Sea.  In fact, just send me another camera, the Canon PowerShot S90 would be very handy.

I was pondering the options when my husband came home with the camera.  Ah!  Success!  And where the hell were you when I needed to photograph my mostly clean office?

Taking the camera, I began to stalk my prey.

Here he iz (all wildlife photographers speak with funny accents or are later replaced by a David Attenborough clone, true story).  In hiz natif habitats.  Ay zee him.  He not zee me.

Across de gravel Ay creeps.  He slips.  He hears me not.  Ay must be silent.  Silent as a duck.

Dis is difficult.  De Dane he keeps laffing at my aczent.  Ay tells him to zip it.  Ay am a highly acomplished vildlife fotografer and he cannot even say veil correctly.

I can only assume that the wildlife photographer was brutally maimed and died later of injuries sustained in the field, which is fine since a David Attenborough clone turned up later that day for additional filming.  Or maybe it was the clone that maimed the photographer.  Clones do that you know.

Or maybe the photo-shoot quickly dissolved into LOLcats. 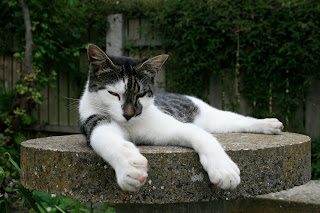 I'm on yur pedestal.  Feel free to wurship me.
Posted by Archaeogoddess at 2:42 PM

Email ThisBlogThis!Share to TwitterShare to FacebookShare to Pinterest
Labels: and we named him Alot