Is it the circle of life or signs of the impending apocalypse?

Right, so at the beginning of summer I was amazed that seagulls were rare and bullfrogs plentiful in my little town by the sea. I mean, that's all kinds of backwards if you think about it.  But it was what it was and the croaking of amorous bullfrogs punctuated our sleep for what seemed like months.

But I didn't mind the bullfrogs.  One, it sounded a lot like where I grew up, where the sound of frogs drifted up from the creek, and two, I hoped they would keep the mosquito population in check.

I'm not entirely sure what happened but suddenly the cacophony of the pond came to an end.  And nary a frog was to be seen or heard again.  Perhaps they over-ate and died.  At any rate, it's been a long time since the frogs croaked.  (Boo-yah, that was an awesome pun!  Fist-pump to the sky, yo!)  And true to form we were quickly swamped with mosquitos.

It was as horrible as it sounds.  Doors and windows had to be closed before turning on the lights and several times the ceiling had to be vacuumed because a swarm had landed and looked like they were in for the long haul.  The bedroom was a scene of carnage.  Thankfully the ceiling is lower there and I could kill the little buggers with some toilet paper.  Tallies were kept of the daily kills, though usually when you hit 10 you just go with "lots" as the final number.  The old Israel mosquito killer was plugged in. (It's a red thing that looks like a plug adapter, but isn't.  You put a special tab into it that releases something into the air that repels mosquitos when it's plugged in.  Possibly very toxic but also very effective.  Far more effective than my other option: waving my arms and yelling.)  The mosquitos also got increasingly larger as the summer progressed.  I even stopped asking my husband to eject the spiders out of the house, it got so bad.

Yes, you heard me right.  I LEFT THE SPIDERS IN THE HOUSE!  That is how serious the mosquito pestilence was.

The temperature dropped a bit and we thought, ah, this will end 'em, but still they came.  The bathroom, or should I say the blood-bath-room, was a region of strategic importance.  Oh, the battles that were fought!  The number of times I peed in the dark!  *shakes head*  Numerous spiders were allowed to spin in the window in a desperate attempt to bring cool air in without letting in the swarm.  The spiders, alas, were useless.  I don't think I saw one desiccated mosquito corpse in any web, either in the bath or bedrooms.  In fact, yesterday I found the corpse of a full grown mosquito on my desk.  He seems to have died of old age.  OLD AGE!  He had a grey beard and a mechanical wheelchair!  Or would have if they made them for mosquitos.  And that beard may have been part of a dust bunny he tangled with.  But still OLD AGE!!

But then, after just a few weeks of oh-my-god-honey-look-at-the-ceiling shrieking and pointing, the mosquitos were, for the most part, gone.

In their place came the spiders.  I don't know what they've been eating, because it sure as hell wasn't the mosquitoes, but they have thrived all the same.  What was once a few spiders in a window or one corner of the room because a scene from "Raiders of the Lost Ark."

Yeah, that scene.  The one that gives me the shivers. 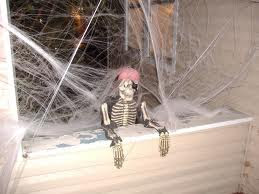 This is my house after one day of not cleaning.  I think the poor bastard in this photo was trying to stuff some ads for Netto under my door when the mosquitos got him.

Meanwhile the dust-bunnies have been gathering in strength because we're too busy vacuuming the ceiling.  I might as well just attach the chandelier to the floor and tell everyone the house was built upside down.

But today I noticed something very different when I threw open the curtains (scattering several spiders and rolling at least one up into the pull-down shade).  Swarms of sparrows and swallows.   As I look out my window now, they are mostly swallows, but this morning my garden was full of dust-bathing house sparrows.  It's like I'm living "The Birds." 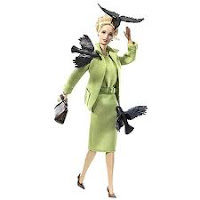 Only with small cute little birds that chirp and that had better be eating spiders and mosquitos instead of the large cawing crows and ravens that infested the movie.

Omygod, is that a "The Birds Barbie"?

I want one!  I'd call her Lenore and the birds Edgar, Allan, and Poe!  It would freakin' rock!!

Someone, please, mark this down for my birthday present.

Right, where was I?

Oh yes.  So Act of God or Act of Nature?  Am I looking at signs of the impending apocalypse or should I rent "The Lion King" and a set of bongo drums?

So far, Alot has not taken to lying down with dogs (a trusted and true measure of impending doom, right up there with an enraged Stay Puff Marshmallow Man terrorizing downtown New York) and the only mass hysteria I've seen is in Netto (although it looks like it's been hit by a plague of locusts so maybe a point towards apocalypse should be awarded).  But I did see a ginormous ginger cat on a boat the other day.  He looked completely calm and not at all like a Turkish Van (a breed of cat that likes water).  That might have to go on the pro-apocalypse list.

Any other signs of a Revelatory nature?  Pia K. converts to Islam?  Dub-ya joins PETA and gives away his millions to help clean up the Gulf?  Joe Biden manages to go a week without putting his foot in his mouth?

If you've seen a sign of the End Times, let me know in the comments, will ya?
Posted by Archaeogoddess at 6:04 PM

Email ThisBlogThis!Share to TwitterShare to FacebookShare to Pinterest
Labels: Island life, places you wish you could move to