It's like "Attack of the Killer Tomatoes" only without the tomatoes. Or the killer part. Probably.

I got two tomato seedlings a while back.  I felt bad about taking them, even though the woman was giving them away for free.

"Please, take one," she said, pressing the little bundle into my hands.  "Take two!"

I want to raise my own food.  I mean it.  I really do.  But I can't keep herbs in my window alive for more than a week!  Animals?  TOTALLY!  Plants?  Eh, your days are numbered my green friends.  Giving me these tomato plants was condemning them to a short, miserable life.

But I took them home, because tomatoes, I was assured, are the easiest thing in the word to take care of.*

A quick aside: my paternal Grandfather grew GINORMOUS tomatoes in his garden in Los Angeles.  Heaps of the things the size of a child's head.  So I know a thing or two about growing tomatoes.

And those would be the two things I know about growing tomatoes.  Everything else... um, they like water (totally guessing here) and uh, need soil to grow in?

My god, they're going to give me a PhD in tomatoes here, I'm a freaking genius!

Step 1: Buy huge bag of potatoes.
Step 2: Eat all the potatoes except the last dozen or so.
Step 3: Put the bag in the shed and tell the wife you're going to grow potatoes.

I mean, call me crazy, but aren't you supposed to plant them or something?  I don't think they make baby potatoes just because you left them alone in the dark.**

Anyway, so the little seedlings languished in my kitchen in the window for a while.  Until I remembered to tell the Danish Boy to get me some soil.  He brought it home with a "my god do you know how many types of soil there are?  And how much they cost?!  I went with the cheapest from the supermarket, I hope that's okay."

I was all "nope, nope, sure I guess" and went hunting for a big enough pot.  I had managed to keep some basil alive for a few weeks and figured, heck they should all go together.  Basil and tomatoes are like peas and carrots, surely if you eat them together, you can grow them together.***  And if you are a herb and survive my kitchen, you deserve a shot at life in a pot in my greenhouse.  Or maybe that's like damning the basil to Siberia.  Who am I to know these things?  I know nothing about basil.

I removed the desiccated remains of an olive tree from a pot.  The previous owner of the house had this languishing olive tree and I finished it off last winter.  It then sat as a mute testimony to my ability to not be able to cultivate Mediterranean plants in a northern European climate.****

I popped the basil and two tomato plants in with some soil, watered heavily, and placed the pot next to the wall in the greenhouse, figuring that the sun would heat up the greenhouse and the wall, which would radiate heat throughout the night, keeping the plant warm.  Also, because we've lost three panes of glass in the greenhouse, it doesn't get that hot, so radiant heat would be important.

But I neglected to remember the grapevine.  We have two, and the one in the greenhouse is a monster.  It bides it's time in the winter and then in the summer BANG!  Leaves and grapes!  GRAPES!!  GRAPES OF WRATH DOOM!!

So as I went out every day to water my tomato plants, I failed to notice that the grapes were taking over and very efficiently blocking out the sun.  Until I noticed that my tomato plants were growing at a weird angle and turning yellow.  Mold began to grow on the soil.

At this point a gardener would probably have cut back the grapevine.  But since I'm a "grow as you will and let others grow as they will too" type, I just moved the tomatoes to a sunnier location at the front of the greenhouse.  I patted myself on the back, because I placed them where condensation drips, so it was like they would be under an automatic drip system!  And surely the wind wouldn't be that bad...

My tomatoes are suffering from weather extremes, but even with leaf-curl, they gamely struggle on.  The basil, having taken a beating, seems to be pulling back from the brink.  I finally had to go get some supports for the tomatoes, and now they are really taking off.  I even have some flowers, which suggests I may someday have tomatoes! 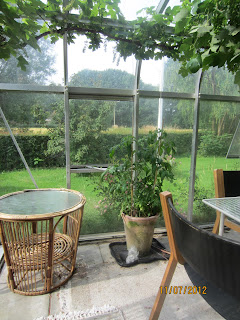 The grapevine finally reached epic proportions and had to be cut back.  I attacked it with clippers and we can at least get back out into the greenhouse. 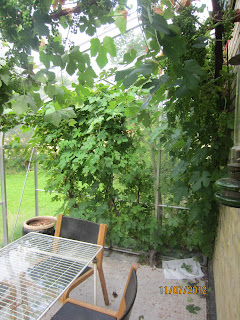 I really should have done a before and after picture, because DAMN it was crazy.  But instead you'll just have to make do with a picture of the box I stuffed all the clipped bits into. 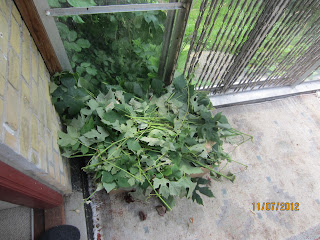 You'll just have to believe me when I say, there IS a box under all of that.  This year I am determined to do SOMETHING with the grapes.  The DB is pushing for wine.  I'm thinking grape jelly.

* The one plant that thrives under my care?  The orchid.  Aren't orchids supposed to be difficult?  Because this one is great, the less I do with it, the happier it is.  It's like the perfect plant.
** Another thing I learned about potatoes - if you have a big bag of them in the pantry, they make the pantry humid.  And that makes your onions and garlic go moldy.  And your lemons will grow mold on the skin, but you can wash that off.  But really, a nice basket for your onions and garlic to hang in your kitchen is not only decorative, but also a good way of not having to throw away onions before you can use them.
*** Actually, I don't think you can grow peas and carrots together.  In which case, basil and tomatoes are NOTHING like peas and carrots.  Other than that you can eat them together.
**** Although, come to think of it, the fig tree is doing okay.  Probably because I'm not trying to save it's life.
Posted by Archaeogoddess at 10:59 AM

Email ThisBlogThis!Share to TwitterShare to FacebookShare to Pinterest
Labels: Adventures in Gardening