The culmination of two weeks of work

But for two weeks, I had an answer: I was painting the backdrops for the local theater production.

Some of you will be going "???" and some will be LOLing.  A little background: I did four years of drama in high-school, including more than my fair share of musicals.  This means I have a lot of experience with painting scenery.  And while I did a lot of acting during those years, I am not performing in this years production, "Treasure Island," because
A) it's in Danish and I have a hell of a time in Danish
B) there's a shit-ton of singing

Er, didn't I just say I did a lot of musical theater?

Yes.  And in all that time I managed to never have to sing a solo, especially after the choir director heard me sing that first year in try-outs.  Really, it was better for EVERYONE if I just blended into the choir or had a non-singing role.

So can we just agree that making me SING in DANISH would probably break several Geneva Conventions (I'm not sure who would suffer more, me or the audience) and leave it at that?

Anyway, last night was opening night and I snapped some pics before the audience filled the seats and the sun set behind the trees.

It's a big stage, so it's hard to get it all in a photo.  From the left, there's the Hispaniola, a typical English sea-side town circa 1750, the Admiral Benbow Inn, Treasure Island and the stockade, the jungle, and Skull Mountain aka Grotto where we hid the musicians (the musicians must have cover, this is Denmark, we can't guarantee good weather).  The town-scape actually opens up (you can see the seam) and becomes Trelawney's library. 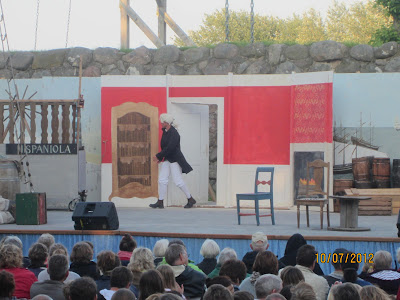 Here's the library in all it's glory.  Can you see the flames in the fireplace?  I did that.  I'm terribly proud.

Now I'm no professional, but I was supervised by one.  Peter did all the fine details and together we painted the rest.  I'm very good at painting large blocks of solid colors.  I learned a lot too.  Like, if you mix yellow and black together, you do NOT get darker yellow, you get khaki green.  And black and white and ORANGE makes a very nice stone grey.

I spent most of the performance chasing my child all over the place and not really getting a chance to watch the play, but it sounded pretty good.  Some of those guys can really sing!  And there were some stand out performances too.  Doctor Livesey and Squire Trelawney were fabulous.  Trelawney managed to sound like an upper-class British twit IN DANISH.  Others made up for a lack of acting ability with enthusiasm, which is really what half of community theater is about.

Maybe next year I'll agree to be on stage.

*The answers are: California, A LOT, I married a Dane, he got a job, I like the countryside IS THAT SO WRONG??
Posted by Archaeogoddess at 12:10 PM