10 clues that I'm not a Dane and still a Californian (mishmashing two current memes here)
1) I hate licorice. HATE it. Can't stand the flavor, the smell, the feel. Ugh. I was told that eating licorice would make me a "real" Dane... like I needed another excuse to stay away from it! YUCK!

My nightmare!
2) I'm always cold. Really really cold. Summer in Denmark is like spring in CA. While Danes are passed out from the heat, collapsing on sidewalks in puddles of vanilla ice cream (pst, Denmark, it comes in more than three flavors, you know... no, Turkish Pepper is NOT a flavor, that's an abomination and I think the Turks are offended that you'd name that stuff after them) I'm thinking it may be time to take off my sweater.

Spicy salty licorice flavored ice cream... Never mind the above, THIS is my nightmare!
3) I never thought of myself as a vegetable nut. But I can't get over the lack of greens on many dining tables. Where're the veggies, folks? Boiled potatoes and iceberg lettuce are close, but sorry, you only get an E for effort. Danish Food Pyramid
4) I don't "do" Danish modern. I think it looks like some form of antiseptic hell from which there is no escape. Arne Jacobsen chairs? Please tell me the decimal point on that price tag is misplaced, it looks like a reject from a failed Jetsons movie and I am not going to have that in my house. Homes should reflect your personality and by the look of your two-toned empty bland existence, we aren't going to have much to say to one another.

Blame the other 5.3 million people who bought the EXACT SAME THING!
5) I laugh loud. And often. Even when I'm alone in front of the computer.

6) A three hour car ride is NOTHING. Back in the day, we'd drive that far just to hang out in San Francisco for a few hours and then drive three hours home. I once drove 6 hours to buy a cake from the Madonna Inn and then 6 hours back again. 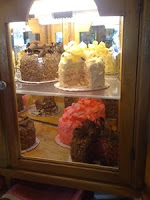 Madonna Inn cakes: total sugar overload
I love to drive. I love to sing along with the radio as I drive. I love being driven somewhere so I can look out the window and shout excitedly about what I just saw. And I love driving on freeways. Proper freeways. If I can, I'll change 5 lanes of traffic just because I can. 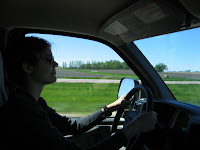 7) I heart Disneyland. The original Disneyland. All other theme parks pale in comparison. I can't explain it. Other parks have bigger faster rides - but for me, nothing beats the Jungle Cruise and the terrible terrible jokes therein. This is the epitome of my childhood.

8) I hate public transportation. Scares the crap out of me. Did you know there are no homeless people in LA? There's just people waiting for the BUS! Ha! Something like 50% of the bus drivers in San Francisco are drunk while on the job and at least one little old woman gets run over by the bus she just alighted from ever year. 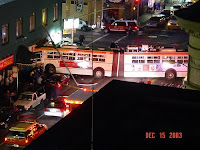 Trying to find a picture to sum up this sentiment made me glad I don't work in a shared space. Definitely *not* work friendly.

10) The sun sets IN THE OCEAN, darn it. And it's not a wimpy ocean, either. While I've put my feet in many so-called "oceans" and "seas" the Pacific is still the only REAL ocean. Want to gain a healthy respect for the ocean? Go stand on a Fort Bragg beach during a storm. (Actually, stand a healthy distance from the water, that sh*t'll kill you.) 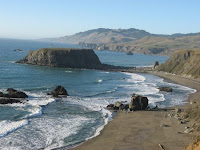 Yeah, you know you wish you lived here too. Wait... I don't live there any more! *Sob* Now I'm homesick! Thanks internet meme. Thanks a lot.
Posted by Archaeogoddess at 1:50 PM

Email ThisBlogThis!Share to TwitterShare to FacebookShare to Pinterest
Labels: places you wish you could move to, random