Usually, in August, I also dig in Jordan with the University of Copenhagen. Well, I don't actually dig, I use my prodigious skills as registrar, who is the person who sits in the non-air-conditioned metal walled office recording all of the things that have been excavated. The students usually think I have a cushy job until they come into my office to get something. "Phu, it's hot in here," they say. Ah, ja, so it is.

The Roman city of Jerash is the second most famous site in Jordan, right after Petra, of course. 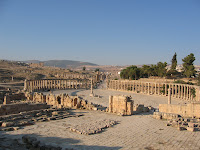 Most of what remains are Roman and early Christian ruins. This is because most archaeologists from the last 100 years were western archaeologists who helpfully cleared away those pesky muslim ruins in order to get to the good stuff. You can't hear the sarcasm in my voice, but it's there. 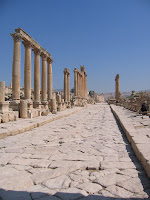 The director of the dig, however, is one of those more interesting fellows who wants to know about the whole history of the site, specifically the Umayyad period (that would be the first rulers after Mohammed), when we know the region was full of life and progressive architectural programs. The most important building in an Islamic city was the mosque. A small mosque-like building was found on the edge of town, but that makes no sense when you consider that Jerash was one of the largest cities in the area with something like 14 *known* churches (more will turn it, Jerash is paved in churches). So Herr Director looked at an overhead photo of the site and said, there, that's where the mosque will be. 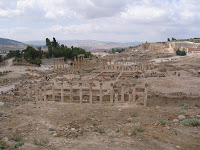 And BAM! He found it in the first season. They've been digging there for a while now. Under the mosque was a Byzantine bathhouse and next to the mosque are shops and a rather odd collection of buildings that we don't quite understand yet. This is common in archaeology. You have a bunch of walls and rooms and then, one day, there will be the "ah ha!" when it all fits together.

People often ask, "how do you know where to dig?" We tell them, "we have a map." Intelligent people will get the joke, but some of the workers on our site truly believe that the dig director has a map in his room with X's telling him where to dig. They wonder why he doesn't just dig up the gold and stop all this dirt moving foolishness. Then maybe they'd get paid early. Sorry, the answer is much more disheartening. We don't know what we're going to find. We make educated guesses based on what we know about city planning and ceramic surface finds. We aren't always right either. Take my dig in Israel, we had NO ceramic from the Hellenistic period and only some from the Roman, but as soon as we began to dig, we hit a good sized Roman farm (possibly farm, we only have a few rooms and a floor at the moment) and a large Hellenistic god-knows-what under that. Ceramic surface finds are often like that. You only get what happens to have been dug up by rodents. Perhaps the rodents at our Israel site like Roman and Hellenistic vessels. For putting on their little rodent side tables, doncha know.

Life at Jerash is very different from what I get on the other side of the Jordan River. 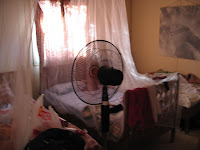 I usually go without the mosquito net, since I get up in the night and find it very difficult to escape. I just slather myself in bug spray. Including the hair. The damn mozzies are determined. We also keep the fan on during the night, even though it gets cold, because it keeps us from hearing all the buzzing. The toilets don't flush, you take the water you save from your shower and dump it in the toilet ONLY when you must. Toilet paper goes in the trash. We empty it regularly. And it could be worse, down in Egypt they often don't even have toilets, let alone showers. Some of the stone age sites in the Jordan desert are in the middle of NOWHERE and you are on SERIOUS water rationing. I'm glad I don't have to check my bed for scorpions. (Though they have been known to get into the rooms sometimes.)

Because it is a muslim country, we go about in pants and longer sleeved t-shirts. Women don't have to be veiled, but we do take a man with us into town. There won't be trouble, but it makes the locals more comfortable to know that the women are properly looked after.

We work a 6 day week. We head into Amman on Friday night and come back Saturday night. The first Friday night we're all exhausted but are also desperate for beer. It's a dry dig, no drinking on site. Ever. What's hilarious is watching all the Danish students not realize that a week of sobriety and hard labor means you get smashed after two beers. No one feels very well when they have to go out on a tour of ancient Amman Saturday morning. 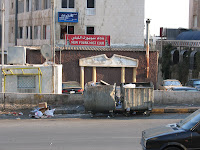 No, that's not ancient Amman. That's one of the more humorous things I've seen in Amman. Between the New Yourk Nigt Club and the Kempinski, you really need to know your way around to find somewhere affordable that is NOT a dive. These locations are still a hazard, I was watching my step (it was dark and there were uneven stairs) and walked into a metal beam, giving myself a mild concussion. 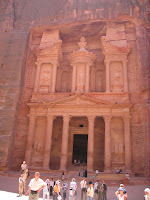 Yeah, yeah, everyone takes that picture. No, there are no Nazis. 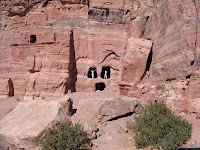 Is that a more unusual Petra shot? Unadorned rock cut tombs are everywhere, and if you have a tall person in your group, they can boost an archaeogoddess into a window for a funny picture.

This year I am not going to Jordan. August is Ramadan, and it would be completely unfair to ask the workmen to neither eat, nor drink, nor smoke during the day while making them do hard manual labor in 50 degree CELSIUS heat (that 122 F, for the rest of y'all). So the dig got moved to June. Which is when I'm in Israel. And since I'm an area supervisor working on the final publication of the site, I should really be THERE instead of sweating in my little metal office in Jordan.

But I'll be thinking of my dear friends as I sit in my air-conditioned cabin, cutting lemons for the gin and tonics.
Posted by Archaeogoddess at 12:31 PM

Email ThisBlogThis!Share to TwitterShare to FacebookShare to Pinterest
Labels: archaeology, things that make the archaeogoddess happy