I've been a very good girl and taken pictures of my garden for you all. 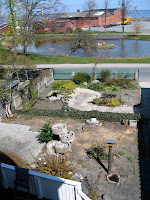 This is my garden from my bedroom, right before spring errupted.  Across the road is the duck pond, where the nefarious Ducks of Doom await and plot world domination.  Then there's the harbor and the sea beyond that.  My uninterupted sea views are, in fact, interupted by the harbor.  But come Fleet Week, I get a great view of both ships.

Actually, we did have two small navy vessels in port a few days ago.  It was a little dark to take a non-flash photo and I only take military photos when I am sure no one is going to catch me because I don't want to get shot, thankyouverymuch.  So you'll just have to trust me that we had sailors in town. 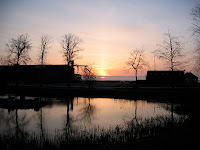 Of late I've been suffering from insomnia.  This is partially exasperated by having my husband rush off back to Aarhus to make money as a taxi driver until his job here beings in July (more specifically, until his first pay check is deposited) and I just kinda forget to go to bed.

I'd forget to breathe if it wasn't a subconscious act.

But it means I end up getting to watch the sun rise over the duck pond.   Once I even managed to photograph it!  I love sunrises.  Provided that I've been up all night to watch them.  I'm very unfond of seeing sunrises because I've had to get up early.  I like watching the sun rise and then going to bed.  I also like wandering around town after everyone else has gone to bed.  But taking pictures in the dark is a little difficult - I would need to find the tripod, learn to use a camera properly, and have patience.  Posh!  The point of wandering around in the dark at night is the wandering around in the dark at night!

I hear tonight is a full moon.  I'm so tempted to go out and wander around in it. 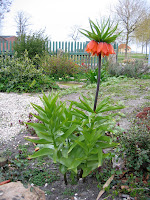 Anyway, my garden.  I didn't plant it.  According to our landlord, he spent a Great Deal of Money on it and we must take care of it.  This would be much easier if I knew anything about plants.

It's all spiky and the red flower thing is even more red in real life, but I'm not a fabulous photographer and I lack photoshop.

And I have no clue as to what kind of flower it is. 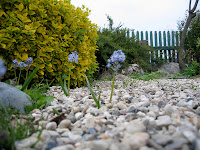 There is also this flower that's growing in the gravel and nowhere else in the garden.  This suggests it's a weed, but it's pretty and I want to keep it. 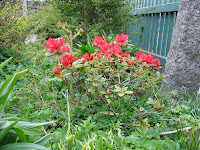 It's got spiky thorns like a rose, but it doesn't look much like a rose.  I was going to lean in and sniff it, but I'd have to step on some things that may or may not be baby plants and possibly grasp another spiky plant-bush thing in an effort not to fall on my face into the flowerbush and that would just suck.

This picture also shows how much lusher my garden has gotten since I took the picture at the top of this post... just a few days ago. 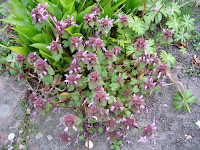 I also really like this plant.  It's a purple plant.  Has little bitty flowers that remind me of a plant back home that I used to think was Fox Glove, but now I know is not.

Oh, you say, I thought you said you didn't know about plants?

Yes, well, I am sort of a nut for poisonous plants used in murder mysteries.  And Digitalis is one of the fun ones.  But I did just learn that it's considered a weed by the USDA. 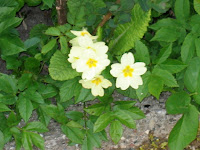 Then there is this little yellow flower growing right next to my ornamental pond.  It's got leaves that totally scream "weed" or possibly "romaine lettuce" but a quick wikipedia trip doesn't tell me if lettuce has flowers.

Because of the whole Fox Glove thing, I tend to not eat random plants in gardens.

That and my mother liked to tell us kids the story of the boy scouts who went camping and then used Oleander sticks to roast marshmallows and DIED!

Speaking of the ornamental pond... 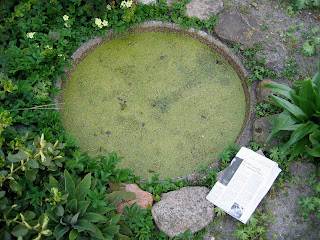 Here is a picture, with a newspaper for scale.  Or perhaps I've kidnapped this pond and this is a proof of life photo.

It's about two feet across and probably about that deep.  It seems to be made of a cement ring, sunk into the ground, with some solid bottom keeping the water from leaking away.

And it is full of dead leaves.  Topped by small green plants that do not seem to be algae and perhaps are meant to be there.  Not really sure on that one.

My husband is at a loss as to it's purpose.  In my husband's world, things have purpose.  I like things to have a purpose, and in my house, if you don't serve a purpose (which sometimes just has to be "entertain the Archaeogoddess for half an hour) you don't get to move with us then next time we change addresses.  It's a harsh old life in the Archaeohousehold, but it makes it easier to move from house to house.  However, I recognize that sometimes we don't need to know the purpose of a thing to appreciate and like it.

That being said, the ornamental pond creeps me out.

I went and fished a plastic bag out of it the other day and I thought, just for a minute, that I was about to fish a foot out as well.

I mean, come on, doesn't that pond just scream "body dump" to you?

It would have to be a small body.

Which just makes it all the more creepy, doesn't it?

Don't worry folks, if I was going to go about killing people, I would definitely not put them in my ornamental pond.  Because putting the body in your own backyard is how they catch you.  There is also the problem of size.  My pond is just too small.  To fit a body in it I'd first have to cut it up and deep fry it until it was crispy and then run it through the wood chipper, and if you are going to go through that much trouble you might as well just dispose of the body somewhere else, like the fertilizer ponds that are all over Denmark.  Your victim could be spread out all over Samsø without you having to lift a finger.

Then there is all that business about pig farms.  Lots of pig farms in Denmark, you know.  This country is just crying out for a crime syndicate and a mob boss.
Posted by Archaeogoddess at 9:29 PM

Email ThisBlogThis!Share to TwitterShare to FacebookShare to Pinterest
Labels: Island life, places you wish you could move to