The theme song for this post is brought to you by Jimi Hendrix.

So I'm taking driver's ed (because 16 years of exceptional driving experience in a variety of weather, countries, and vehicles and a spotless record means NOTHING to Denmark) and trying to memorize foreign vocabulary and listening to Nirvana Unplugged.

Except I do not remember being nine months pregnant in high school.  In fact, I think I weighed about half of what I currently weigh.  And rocked green corduroy pants, orange flannel and t-shirts with such witty sayings as "Cat Wants In/Cat Wants Out" with associated cartoon.  I suppose I could still wear such things and claim I was being "ironic" and then get shot for being a hipster.  Worse things could happen.  I could be trying to wear leggings and over-sized sweaters with large belts...

Only I'm struggling with the NemID nonsense (hey, got the DB at home for a few hours, best try to make use of his expansive Danish vocabulary while I can) and the circle of ridiculousness is right out of 1984.

I feel like I should be dancing the Time Warp... but that takes me back to 1975 and I wasn't actually BORN then. (If you are confused about this "Time Warp" thing, click on the link.  Not that you'll understand better afterwards, because The Rocky Horror Picture Show never did make any sense, but hey Susan Sarandon, Barry Bostwick [you may remember him as the Mayor in "Spin City" - oh yeah, THAT GUY] and Tim Curry in women's underwear!)

Oh for the good old days, when you immigrated by showing up in some port, being checked for lice and TB and then released to the hounds.  Or even better, when you showed up in some port and stuck swords and axes into the natives until they paid you to stick swords and axes into someone else, usually their neighbor.  Remind me to change my ring tone to "Flight of the Valkyries" and to pick up a horned helmet from the museum gift shop before I take my driver's test. 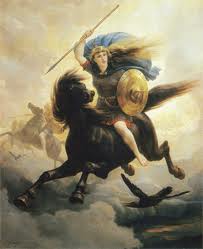 Hvad skal du særlig opmærksom til, bitches?
(What should you pay particular attention to, oh driver's education student?)
Posted by Archaeogoddess at 1:58 PM

Email ThisBlogThis!Share to TwitterShare to FacebookShare to Pinterest
Labels: Danish - it's not just a pastry anymore, places you wish you could move to