The wildlife 'round these parts is going to kill me dead

I was at the doctor today getting checked up before traveling.  In DK you get multiple midwife appointments, but only a handful of doctor appointments, today was my second visit.  He didn't really do anything that the midwife didn't do last week, except he used an old fashioned tube thing to listen to the baby rather than a fancy doppler-sonic thingamabob (it's official title, I'm fairly sure).  We discovered that I've gained about 8 kg since I got pregnant (that'd be 16 lbs, my American friends, which is why we'll stick to kilos because 16 is A LOT OF POUNDS) and that I'm within the happy normal range for pregnant women in their 20th week.  We also discussed why I am still in week 20, for like the third week in a row.  See, according to my reckoning, after I Googled "when will I give birth" (and this reasoning was supported by the midwife), a girl starts counting from the first day of her last period and then you just count 40 weeks and figure you'll give birth in week 41 or 42.  But then during the ultrasound the technician narrowed the due date down to a very specific time frame.

Oh, I said, sure thing. And I wondered if I could hold off until the 25th, which would be my husband's birthday because then I wouldn't ever have to buy him a birthday present ever again because LOOK AT OUR CHILD, THIS IS WHAT I GAVE YOU THAT DAY!

But then Because It Is Written, the doctor takes the date and subtracts back (the week of the 19th being now made week 40, although on the Danish calendar it is something like week 12 or some such nonsense) and tells me, no, NOW I'm just about STARTING week 20.

Dude, I have been 4.5 months pregnant for half a month now.  I feel like someone stopped me halfway through a marathon and said, "now hold up there lady, KEEP JOGGING THIS IS NOT A BREAK, but we just have to hold you here for a bit FOR THE FUN OF IT."

I know this is completely irrational, but meanwhile, I'm gaining weight and I had to finally take out my belly button ring because it was starting to feel like someone was constantly tugging on it, but it was okay because I was half way there and now WHAT DO YOU MEAN I'M NOT HALF WAY THERE  YET??

Right.  So, fat but healthy, I waddle my way home on foot because I am not crazy, y'all, I am not getting on a bicycle.  And the sun is out and the seagulls are squawking and the wind, for once, is not trying to peel the skin off my face and I'm thinking, hey this is pretty nice and then suddenly from my left what I took to be a large bush was in fact a short bush topped by a pheasant and this pheasant decided I must be The Very Devil Himself and so leapt from his perch with this horrible noise that can only be described as "sheeeeeeeit" and flapped not a foot from my face before winging off into the sky. 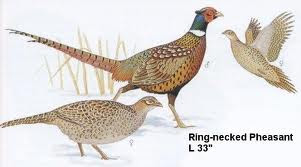 Sorry, I didn't have a camera on me at the time and it was TRYING TO KILL ME
And I screamed "Sweet Jesus, Holy Mary Mother Mother of God!"

Growing up, pheasants were something you saw stuffed on a wall or in a biology lab.  I've seen a few in DK running around in fields and once pointed out one on the road, "honey, slow down, psycho bird in the road" and he was all "you mean the pheasant" and I was all "yeah, whatever, it's obviously suicidal, slow up a minute." 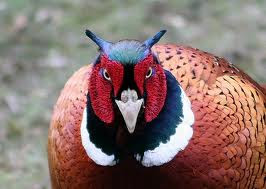 Is this not the face of a psycho killer bird OF DOOM?
And here was one launching itself at me!  No wonder you have to kill them, they're after us!  They'll kill us all!
I had half a mind to turn around and go back to the doctor and say "I'm afraid I may have just suffered a major myocardial infarction, could I have an EKG and permission to toss back a whiskey?"
A few weeks ago we had a much nicer wild beast in the garden.  A hedgehog.  Again, growing up these were things you saw stuffed or in zoos or other controlled settings, not wandering around in the garden.  I've seen hedgehogs a few times, in Israel (that was my first time seeing them in the wild and it was, well, surreal - that was also the night that we saw cows wandering through the banana fields and I wish I could tell you that we were doing some awesome drugs, but no, we were stone cold sober... and very confused), in Germany (usually flat on the road), and in DK, but never in my own yard. 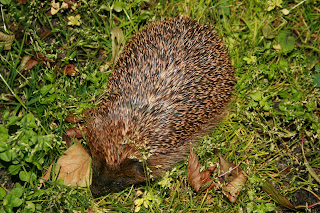 The Danish Boy took this photo... about about 5 others,
just to capture that cute "I'm in yur garden, nomming yur grubs" look.
Poor thing probably just wanted to find some peace and quiet, not the paparazzi that greeted it upon arrival.  Now had it launched itself at me, I may have had to rethink my position, but as the case may be, they seem to be mostly harmless.

Except it did mean that I was running around outside in only my slippers... I could have caught pneumonia or something.  Or maybe it was trying to sneak up to the house when it was seen by my husband.  Hmmmm, innocent hedgehog or cunning assassin?  Well played, Mrs. Tiggy-Winkle, well played.
Posted by Archaeogoddess at 8:18 PM

Email ThisBlogThis!Share to TwitterShare to FacebookShare to Pinterest
Labels: Archaeospawn, my home