First of all, I just want to say Thanks to all the readers out there!  You guys rock.  Give yourselves a big ol' hug for me!  Go on, no one's watching.  Unless you are reading this at work, in which case, tell your boss you were just trying to get that itch on your back.  Pesky itch.

So a couple days ago I had one of those mornings where you think you may have ended up in a montage of some badly written comedy.  First of all, right after I rinsed the shampoo out of my hair, I reached down, grabbed the body soap, poured a big ol' handful into the palm of my hand and slapped it onto my head.  There was that moment of "wait, this motion feels mighty familiar!"  Followed by "damn it, that was the SOAP!"  I used my head to lather up the soap and wash myself.  It's a rather expensive soap and I was not about to waste the suds.  Then, while making my breakfast I put the peanut butter in the fridge and the butter in the cupboard.  (What do you mean, you don't eat peanut butter and nutella sandwiches for breakfast?  Yogurt is for yeast infections!)  The good news is that it's pretty cold in my house, so when I discovered my error a little while later, nothing had happened to the butter.  My brain was so out of it I ended up making myself a cup of coffee to compensate.

Big fat aside: I gave up coffee for the pregnancy because I drank A LOT of coffee.  I would drink until my heart fluttered and my hands shook.  I'd stop drinking it after three or so in the afternoon, because then I couldn't sleep at night, but, yeah, a lot of coffee.  It took three days to get through the withdrawal.  Worst three days of my life.  Migraines like you couldn't believe.  I could barely eat.  And since I was new to this whole pregnancy thing, I didn't take a single pain killer or drink a watered down cup of coffee to ease my pain.  It was cold turkey baby.  Ever seen "Trainspotting"?  If I could have opened my eyes, I bet I would have seen a baby crawling across the ceiling.  It was horrible.

But on the up side, now if I need to jolt myself back into alertness, it only takes a small cup of weak coffee.  Or a soda.  Oooh, I let myself have a Sprite-like soda the other day and it was like POW! ZING!    And a small coffee - it's amazing!  And probably safer than me walking into a semi because I just didn't see it.  But I'm still only drinking coffee when I absolutely have to, most of the time it's green tea or hot chocolate.

So now that I was ridiculously clean and had saved the butter and was oh-my-god-I'm-AWAKE alert, it was time to finally make the tebirker.

Tebirker - croissants that aren't quite croissants.  Danes eat them for breakfast with butter and jam, or just butter, or nothing - the food fascists are probably freaking out right now "jam?  She ate them with JAM!? Revoke her residency!"  I got the recipe from Atherosclerosis, a fellow Californian and a total foodie. 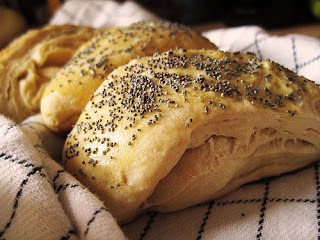 And this is what mine looked like (note, I am NOT a food photographer): 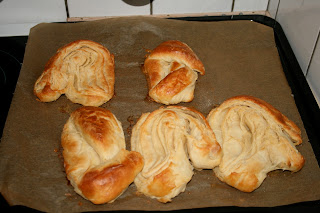 They tasted good.  I mean, that's the main thing, right?  Were they worth the effort to make? (The rolling!  The never ending rolling!)  Eeeeehhhh, that was A LOT of effort... and they make them up at the bakery with marzipan in the middle... I really like marzipan.  I mean I *really* like marzipan.  I probably could make mine with marzipan... *sobs* Don't make me roll any more tebirker!  Rolling things with yeast is a [insert explicative of your choice].  They get all elasticky.  You roll and it shrinks!  Shrinks!  When I worked at that pizza restaurant we had a rolly thingy to roll the pizza dough.  If I was going to make tebirker again, I would demand my husband buy one of these things.  I roll enough pizza dough by hand in this house.  I am not going to roll out tebirker too.  Pie crust is SO EASY compared to this.  You roll pie crust out and it STAYS PUT.

Positive side to this experiment, the DB said, "oh, so now when someone asks you what kind of bread you would like for breakfast, you can say tebirker."

He hates rundstykker, he knows I'm not a fan of rundstykker (buns with hard outside and soft inside, the crust tends to cut my gums, some people love them, but I am not a fan - give me regular old soft buns or biscuits PLEASE, but rundstykker are What One Eats for Breakfast In Denmark), he knows my love of pastry and yet NEVER MENTIONED THIS BEFORE??

Yeah, so positive: I now know what to ask for.  Negative: apparently this has been an option for some time and I'm only just now hearing about it.

He then went on to say that I'm only supposed to ask for one tebirke, because to eat many tebriker is to be bad.  Or not so much bad as we-will-look-at-you-with-condemnation-in-our-eyes-and-tell-you-it's-un-danish.  He added "blah blah blah you shouldn't ask for tebirker and the pastry you really love, the spandauer, because then it's really bad blah blah blah."

Spandauer (or what we call in the US, a danish): 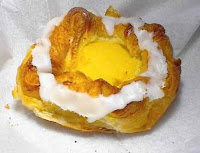 "WHAT!?" I hollered (pregnancy hormones now in full outrage - how dare some mealy mouth Danes stand between me and breakfasty goodness!), and it was a good "what," I rolled my H (thanks Danish, I can now roll just about every letter of the alphabet in the back of my throat), gave the A a good "aaaaaaaahhhhhhhh" and ended the T at a shriek.

I think my husband added "but of course I'll let you eat whatever you want, I'm just warning you what others will say" but it was hard to hear him over the steam whistle that was going off in my ears.

I remember commenting once to my mother when we were at a restaurant and either my sister or my brother was busy smashing all of the food on their plate into one big pile of mush, that they would then happily eat, that this was "gross."  My mother gave me that look that mother's get, that "we may not spank in this house any more missy, but I'd be willing to make an exception this once" and said "if [sibling in question] likes to eat [his/her] food that way, then there is no reason to make rude comments about it, now is there."  You have to remember that we kids were a group of picky eaters - us eating (especially if it was even remotely healthy) was always more valued than the manner in which we ate it.

That's the rule in the AG/DB household too.  So I will make sure my guests have access to yogurt and museli and cornflakes if they really want to pass up Sunday English Brunch (every Sunday I fry bacon, eggs, and tomatoes, boil up some baked beans and toast, er, toast).  But if we are having a "Danish" breakfast (you'll see why it gets the quotes in a moment) expect it to be heavy on the danishes and light on the crispy buns - but the crispy buns are all for you, my dears.  Eat up.
Posted by Archaeogoddess at 2:48 PM