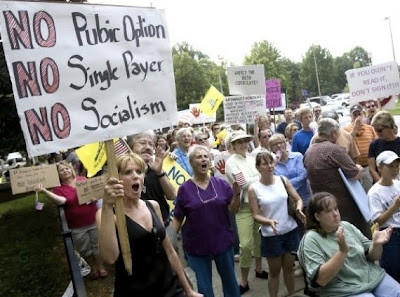 ...things are getting really nasty on the universal health care front.

Now, I'm often asked by non-Americans what in the hell we're doing over in the US, denying people basic health care and sending people bills that were obviously typed on defective typewriters because there is no way that's a real number, and honestly, I can't explain it to you. Because it doesn't really make a lot of sense to me either.

Tragically, after reading some of the tripe that is put out about the death squads sent out to kill your mother and her dog by forcing her (your mother, but maybe also your mother's dog) to stand in line for her (again, not only your mother but your mother's DOG too) botox shots for, like, an hour or something, but *IN THE SUN* and possibly near an ugly faux palm tree, and the evil socialist fascist commie bastards who want to force *YOU* to have an *ABORTION* even if you aren't pregnant, or are a guy and probably don't have a uterus, unless you are one of those gay people, because we all know you have uteruses in your well decorated apartments, and in which case we the True Believers in Christ's Mercy aka Fox News Followers will kill you with our own death squads, but *WE* are not going to make *YOU* wait in line, (quick go back to the start of this sentence to pick up the original thread of this thought) you realize why American's are becoming increasingly stupid.

I went to the Fox News website to get you a link, but then the world went black and my computer started to flicker and I realized that my soul was being sucked into a vortex of evil and filth and so I Force Quit the internet.

Partially recovered, but needing a stiff drink, I returned to the intertubes and reloaded the page that had started my quest. I'm sure she didn't want me to go to... That Place... to look for a good link. I'm sure if she was in the neighborhood she'd even bring me a gin and... more gin. That would be Aaryn Belfer who writes from time to time for The Woman's Colony and wrote this FABULOUS piece (it's a link!!) that kept me smiling in a time of partisan woe. I stole that picture from her too! I'm a commie bastard at heart. I BLEED RED. Um. Yeah.

Email ThisBlogThis!Share to TwitterShare to FacebookShare to Pinterest
Labels: places you wish you could move to