It's not the destination, it's the journey...

I took some amazingly boring pictures of the double-decker bus that I took from Århus to the airport. I took a picture of the ferry boat wake as we sped across the sea (part of the journey from Århus to Copenhagen by bus is on a ferry boat... it's made all the more exciting in that I get seasick, so I took a seasickness pill and felt very weird for a few hours). I didn't take a picture of the airplane... because, well, it's an airplane.

But I'm not going to post those pictures because it was such a BORING trip.

The exciting part was the Nesher taxi. Which I brilliantly called a sheroot, when I meant sherut, in my last post.

I did not take this photo. I staggered out of the airport at 4:30 AM and fell into the cab. As you can see, it's a van thing. They fill it up with people going to roughly the same place. Our destination being: Jerusalem.

Something you should know about J-town. It's HUGE. Small towns next to it have been sucked in. So a Nesher full of people, 10 persons and a driver, may take you ALL over the freaking place. Except East Jerusalem. The archaeological institutes and a few rich hotels in East Jerusalem, yes, they can take you there. But they don't like it. And they'll only pick you up again from one or two really fancy hotels in EJ. Otherwise, they'll drop you on the outskirts and let you take your chances on the uneven sidewalks.

The crazy part is, the driver has no GPS. But he knows all the streets of the entire region. He remembers where all of you need to go, then drives like... well, there's no really good simile for it. He takes up both lanes (sometimes those lanes are all going in the same direction and sometimes not), he thinks speed bumps are for the weak and lights for the timid. There is no way to sleep on the Nesher taxi ride. This is where I believe most people actually find God. Not in the churches or mosques or synagogues, but right there in the cab.

This time I felt like I was on a tour of places I have previously lived while in Jerusalem. We went through Rahavia, the German Colony and the Albright (the American archaeology institute) before coming to an abrupt halt outside the Kenyon. And then had to drag my 22 kg (48.5 pounds that is!) suitcase up these stairs. 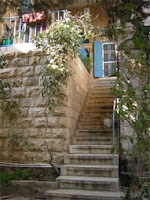 I don't know why my suitcase is so heavy. I had far less in it than last year. However, I used a smaller suitcase then and I think this suitcase is considerably heavier even when empty. There are also two flights of stairs inside the Kenyon. But that would be a really dull picture. They are stairs, okay. Grey carpet if you are curious. And there are more of then than are good for your back, your hand (remove rings before dragging suitcase: check!), and your suitcase itself.

When I opened my suitcase I could see that everything I packed so carefully was now bunched up on the left half of the suitcase (well the bottom half when standing... but you get the picture). I could have used a much smaller suitcase. Oh well. Maybe I can bring back a load of antiquities. KIDDING!!! (They search your bags on the way out of Israel, what kind of idiot sticks an antiquity in their check-in luggage?)

Slept a few hours. Basked in the heat. Almost passed out from how freakin' pale I am. Had problems walking down to get food because I haven't worn sandals since August and my toes were going, "Dude, what is this heat? Is that the sun? Is this heat the sunshine? We've heard about sunshine. Is that why you put sunscreen on us? 'Cause that tickled. How come we aren't enveloped in cotton? What is with these strap things? Can we take that rock with us? How about that rock? Oh, we like that big rock! Let's take that one home!! Please?" I managed not to walk out of my sandals, SUCCESS!! And had my first falafel in god knows how long. Oh the flavor! The spices! The hummus!!

But now I need to nap. My roommate flew in from Montana on a LONG series of flights that began on Thursday and ended in the early hours of Saturday. She's out like a light.

Tomorrow will be packing up the gear and getting it north to the site. A frantic day of packing, unpacking, moving, rearranging, organizing and collapsing awaits!
Posted by Archaeogoddess at 12:38 PM

Email ThisBlogThis!Share to TwitterShare to FacebookShare to Pinterest
Labels: the land that logic forgot