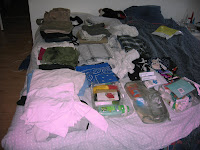 I'm packed. Well, apart from a few odds and ends... like my computer, for example.

I found my dig boots, and I will not be taking my husband's on accident. Found my sandals. Found my trowels. Did not find my hat, but then, I was planning on using my kaffiya anyway. Also couldn't find my dental picks and at least two official dig team t-shirts. Odd. Also missing some wife-beaters, my dig shirt of choice. And one sports bra.

I have oodles of space left in my suitcase. Not really sure why. Probably because there's a total of 4 missing shirts, one missing hat, and a small bag of dental picks gone poof. Really, I've looked everywhere. I really would have liked to have found the dental picks. 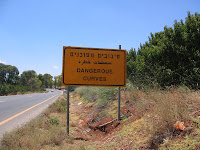 I'm preparing myself mentally for the trip. I've been trying for days, but I really need to stop thinking Danish and start thinking Insanity. Israel is like that. It's freakin' nuts. The exact polar opposite of Denmark. It's fairly dirty (this is a sore point with my husband, who points out that it gets very dirty in Århus on Sunday morning and then I point out that Denmark has people who go out and pick up the trees that fall over in the forrest) and dusty. People live like there is not going to be a tomorrow (whereas in Denmark everyone is living for the long term, putting of life until some point in the future) and drive like complete and utter lunatics. You do not have to worry about bombings in Denmark. Or shootings. Or bulldozers driving up congested streets (over the cars). The hours of business suck in Denmark, but at least they are open when they say they will be. Good luck with that in Israel. Jewish holidays make less sense than Danish holidays, in that they creep up on you and it means that things are closed from sundown to sundown, often opening up after sundown (and thus after the holiday) and this includes bookstores and bars and restaurants. Busses from West Jerusalem do not cross into East Jerusalem, so you have to get off and walk to catch the sheroots (Arab busses) that are rather run down and it's often faster to just walk than wait for the fat woman with the daily shopping to get aboard and stow her gear. Not that the driver waits, so sometimes you get to help her find her oranges under the seats.

Logic does not exist in Israel. We often refer to it as "the land that logic forgot" although it is possible that logic never arrived in Israel, having gotten lost in the desert with Moses and eaten by desperate Israelites who mistook it as bread from heaven. It is, however, a riot of fun and color. You can be about as nuts as you can be and people will just shrug and go about their lives. Very much living in the now and living out loud. Party hard, pray hard. You can get into an intense argument with someone, only to have it end in hugs and assertions of eternal devotion and friendship. You can also get spit on by religious fanatics, whom no one really likes, but they allow you to pray less hard without feeling guilty. You can get amazing shwarma from the guy around the corner. You can get great coffee at a rooftop cafe where you can see the Dome of the Rock and the Church of the Holy Sepulcher and the bustling souk without turning around. You get bumped by nuns who will apologize and bless you in 5 different languages. It is utterly foreign and exotic and weird things happening are completely normal.

You can get pork (it's against Jewish and Islamic law) by going into the Russian Orthodox (Christian) quarter and asking for "white beef" and you can get a ham and cheese sandwich in the Armenian quarter if you know where to go. There's a GREAT Palestinian beer that certain bars have on tap.

Coming from Denmark is a shock. Life is faster, but everyone walks slower. Hot days, cool nights. The sound of the Imams calling Muslims to prayer wakes you up at 4 am for the first two days, but then you adapt and barely notice it until you get home and miss it.

I'm so excited. I wish I was taking my hebrew speaking husband. He makes life SO much easier. I'll just muddle through as I do. I know a handful of words, the most important being the word for hebrew and no. "Lo afrit, english?" Many people speak English or some form of it, or French, so I can get by. I know a few letters as well, and can match up patterns enough to know which bus to take if I have to get from Jerusalem to Bet Shean or Tiberias or Tel Aviv.

But I'm the driver again this year, so no busses for me. Just the joys of mad driving. I actually enjoy it. Although I scream a lot and I may be responsible for running over the dove of peace last year. I thought it was a plastic bag and it didn't move until the last minute, flying up into my grill. How was I supposed to know??

I'll probably be unable to keep up with all the blogs I read. And even if I read them I might not be able to comment so much, but I'm not ignoring you my bloggers! I am going to devote time to blogging which cuts into my reading, but I still love you all!

Think of me at 8 pm Copenhagen time, because I HATE flying and I'll be wondering how fast we get off the ground and how soon they'll start serving alcohol so I can have ONE drink before I try to pretend I am not 35,000 feet in the air with nothing under my feet but AIR and SPACE and most importantly DEPTH!! AHHHHHHH!!!

Hugs y'all!
Posted by Archaeogoddess at 10:25 AM

Email ThisBlogThis!Share to TwitterShare to FacebookShare to Pinterest
Labels: the land that logic forgot