Don't go reading this post if you are squeamish. Or have issues when people describe wounds. Or if you pass out at the slightest suggestion of blood. Because I'm posting a picture here of my injury and I don't want the faint hearted to suffer a coronary just because I have been damned by the gods.

I've got the usual bumps and bruises that everyone gets. I pulled a neck muscle the other day after a particularly violent sneeze, but that's pretty much gone now. I have two bruised toe-nails, but so far neither has turned anything other than pinky-red, so I may not loose my toe-nails....

Are you still reading this?

I am still sunburning myself, but after buying a higher SPF in a brand I've used before, the only place I'm burning is where I manage to not put any on. I seem to choose a new place every day. That's fine. I can handle it.

Today I managed to repeatedly bash my hand on a rock (or actually several rocks) and finally, after a bit of bleeding, needed a band-aid. This was obviously a trial run for the much larger rock related injury I would have a few hours later.

Rocks, when not in walls and generally just hanging out in your square, need to be removed in a proper archaeological fashion. First you dig all around them - and not a hole, you have to bring the level of the entire area down to the bottom of the rock before it is "floating" and then you can pick it up and carry it or throw it to another location. The rock in question was a normal head-sized rock, with rounded edges, and didn't look particularly threatening. I picked it up and began carrying it away... as I got near the discarded rock area, the bottom section of the rock broke away.

Did you know limestone is sharp? I mean, really sharp??

A chunk of it hit my leg and left an inch long gash in my thigh.

A word on my thighs. I love my legs, I think they're hot and I've been really impressed with them ever since my thighs finally got to be thicker than my knees. Which was like 8 years ago. They are now considerably thicker than my knees and have a nice layer of fat to round them out into nicely shaped thighs. I am rather fond of them. Not as fond as I am of my calves, which for reasons that make no sense (honestly, did you expect them to?), I am really proud of.

Anyway, because of the nice layer of fat, the damage was only cosmetic. My skin opened up in a short, fat wound. There was blood running for a while, but fat doesn't bleed and skin is shockingly lacking in major arteries. Whoot to that!

So I again needed first aid, this time a bit more urgently than a scraped finger (hey, it was on my left hand, I'm left handed, how in the hell am I supposed to put a band-aid on my good hand using the one that can barely function on the best days?).

Alcohol wipes followed. Stingy! Then temporary bandage. I was offered the chance to request stitches. But no way, I would rather have a scar than have stitches. I am not scared of needles and shots, but to be sown up like a turkey? Uh, no, thanks, I'll just take my war wound and go, thank you very much.

And they use string or something! Ugh! Argh!

I'd rather use duct tape to patch myself up than have stitches.*

As you can see, I am not a fan of the stitches. *brrrrgh*

After lunch I showered and we dressed it properly with little wound closing sticky things that are awesome. Then Neosporin and a big band-aid. Since those were the last of the wound closers, I'm going to have to wait as long as I can before I shower again. But that's cool, I can do that. And if I can't get the wound to stay closed after than, even using regular band-aids as "tape" that's okay too. I'm just rolling with it.

Anyway, before covering it up, I tried to take a picture, but it's kinda hard to do. I asked the dig director, who not only does medical treatment, but also the photography for the site, to use my dinky camera to catch the following shot (hmmm, should have used a scale... but that might have been pushing my luck): 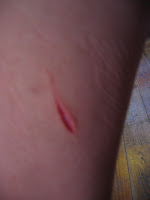 Thankfully, since it's just a flesh wound on the upper leg, it doesn't slow me down all that much. I've just got to "cowgirl up" and go about my business, since it really isn't much of a wound. (Really, it's not much of a "cowgirl up" moment... it doesn't hurt much.) But I do wish I had someone to pamper me and tell me not to lift a finger and feed me olives while I reclined in bed.

Then again, don't we all?


*I'm not kidding about the duct tape, I would totally have used that if that was my only option other than stitches.
Posted by Archaeogoddess at 2:02 PM

Email ThisBlogThis!Share to TwitterShare to FacebookShare to Pinterest
Labels: archaeology