So yesterday was our first field trip. We offer students the option of going to certain sites in the area. Some of these come with "tours" led by "leading scholars," by which we mean that some of us know some stuff about certain sites and we'll pontificate about them if you so desire.

The first trip is always Bet She'an (of which there are MANY spellings). As it is a Roman city and I am a Romanist and I once gave a paper on the Decapolis (means "ten cities" Bet She'an is one of them), I am the tour guide. I have given this tour I don't know how many times. I do, however, often forget to take pictures.

But this time I did nab a few. 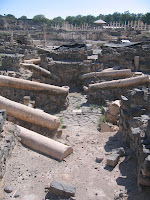 Bet Shean is a multi-phase site, most of the remains visible are Roman and Byzantine, but there was an earthquake in 749 AD that knocked a lot of the city down. Building on top of the fallen ruins is therefor a later period (because the columns had to fall down first, you see) and looks darned cool to an archaeologist.

Behind these buildings, in the distance, you can see the columns of the main street, or Cardo, as it is usually called.

This photo, taken last year by someone else, shows the tel. A tel is a hill made up of a series of superimposed occupational layers. This one is mighty tall and dates from 6,000 BC (at least) to the medieval period (but very little, as most people moved into the valley around abouts 300 BC ish). The Roman city was built on one side of the tel and stuck a few temples on top of the tel, but otherwise kept itself to the valley. 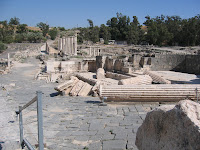 This photo shows more of the earthquake damage. We don't know why no one moved the stones after the earthquake, because the buildings in the first picture shows us that people did live there (there's other evidence, but you don't really want to hear about ceramics do you?), so why did they leave these stones in place? They are freaking big.

Anyway, that was the first tour. My legs were killing me and I'd gotten what turned out to be a rather nasty sunburn on my shoulders and arms. I looked at my sunscreen a bit more carefully when I got back. It says on the front: sweat-proof! Water-proof! Then on the back in small letters: sweat and water-proof for up to 80 minutes.

EIGHTY MINUTES?? I'm digging from 5 to 12! That's 420 minutes! I have to reapply this stuff 5 times a day?? Ugh. When the small shop opens tomorrow I am going and getting a better sunscreen.

I do not usually get this sunburned, but I was just that pale and my sunscreen that bad that I guess there was just no hope. So after a full day of work, sore legs and arms, a hike around a rather large archaeological park - we climbed that tel, by the way - I was beat and ready for bed. It was an early night. (Which is why this blog post is a day late.)
Posted by Archaeogoddess at 1:57 PM

Email ThisBlogThis!Share to TwitterShare to FacebookShare to Pinterest
Labels: archaeology, the land that logic forgot