After our sudden vacation mentioned earlier, the Danish Boy returned to sanding.  Then he had to go back to work.  At his Job.  (I know, you thought that Operation Floor was his job.  So did I.  Boy is my face red!) 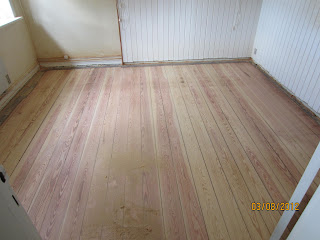 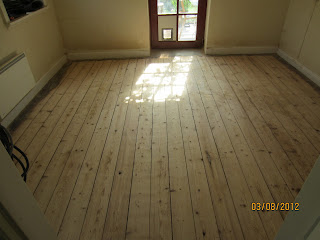 If you're looking at these photos and saying, gee, it looks pretty much the same as it did the last time you posted, I'd have to say SHUT UP, IT IS TOTALLY THE SAME DIFFERENT!

But only because it says so in my contract.

I could have taken photos of the floor today and posted them.  But then you definitely would have said "girl, I cannot see any difference" and the DB would have had the sads.

Can't let DB get the sads.

Mostly because I have to listen to the whining.  *Sigh* My life.  So hard.

He rented a new machine that goes around the edges of the room and now it's almost ready for some treatment.

It will be soap.

If you are having a W.T.F. SOAP? moment, don't worry, that was my reaction.  I was all "the hell you say" and "surely you jest" because, seriously?  Soap?

And the DB was all Blah blah blah...

I assume there was explanation, but I mostly ignored it.  Primarily because my sarcasm would have gotten the best of me.  I heard something about soap being a treatment you use on the floor.  And my inner sarcasm was all "no shit, Sherlock, it sure as hell doesn't go on the wall."  The DB kept repeating himself, as if somehow saying "it's a treatment you use on the floor" multiple times would set off some association in my head "OH, a TREATMENT!  That goes on the FLOOR!  I TOTALLY understand the words that are coming out of your mouth now!"

I went with the idea that it was something that was called soap in Danish but had a totally different name in English.  I was thinking "maybe 'wash' like as in 'white-wash'?"  And I turned to my old friend The Google to help me out.

I tried looking up floor treatments.  Nothing about soap.  Oil, wax, shellac, yes.  Polyetheluragonnaaddmorelatinnow, but no soap.

Ha, well, there's more than one way to skin a cat... not that we skin cats around here.  'Cause if we did, Alot would be a nice foot-rest now instead of the Creature That Lurks in the Corn.  A person should be free to walk next to fields of grain without worrying that something is going to leap out and grab your ankles.  Just sayin'.

Anyway, I go to The Google.dk and do a search for floor (gulve) and soap (sæbe) and BANG, there it is.  "Soap treatment" (sæbehandling).  So I take myself back to The .com and start to type "floor soap treatment" and it suggests "you mean Danish white soap floor treatment!"

It's also one of those "only in Scandinavia" things and a big part of the Danish Modern movement that gives me hives.  However, just because all Danish Modern houses have this floor, does not mean that my little rustic home can't also have them.  Only, without adding the "white" coloring.

Blergh, it's the white coloring that give the Danish Modern homes that anemic, "Twighlight" watching, emo-feel.  (Which is funny, since most Danish Modern furniture is darker in color.  Darker, like the bruises I get after sitting on it for any amount of time, or the bruises I get from trying to maneuver around the pieces, or the bruised toenails I get from tripping over randomly jutting legs.  What the hell is wrong with that furniture, anyway?)

Side note: I was looking for some photo of a Danish Modern interior to nab for this blog, and I saw numerous pieces that are right out of my in-laws house.  Apparently they have a very tastefully decorated home.  And here I was thinking, gah, they really need to get rid of these ghastly pieces of furniture that are designed to hurt me!

In the end, the soap treatment sounds like a good option for the bedroom.  It's not that high traffic of an area.  It will protect the floor, leave the grain visible, be non-slippery, and it's fairly "green" - the soap is pretty much just basic soap, no mad chemicals.

The dining room, of course, being high traffic and high food-all-over-the-place-should-have-gotten-a-dog space will need something a bit more serious.  Also, it's been practically destroyed by woodworm at some point in the past (hopefully it's all in the past), so it needs some major sealing.  That'll probably get something like oil.  A thick, goopy, hardening oil.  And then I would throw a carpet over it... except for that whole food-all-over-the-place look that my child is so enthusiastic about right now.  If banana is good in the mouth, surely it is good everywhere else, right?

But, we'll just tell everyone that the floor has character.  Gobs of character.  Character coming out of it's grains, it has.  Also, possibly beetles.  But beetles with character!
Posted by Archaeogoddess at 1:49 PM