You may be wondering, "how did Alot deal with the move?" or "how is Alot dealing with the baby?"

'Cause, poor Alot, you know - he thought he was moving to this big house with a doting couple and then SHAZAM he's suddenly scooped up and deposited in the middle of wheat fields in a house half the size of the one he'd so carefully chosen and there is this new screaming entity that takes up the space on Mommy that was HIS! 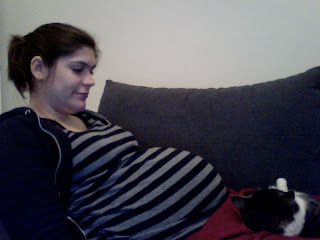 I call this one "Whistler's Mother and Her Cat"

Sometimes he'd even stand on my belly.  However, it was too difficult to get photos while he'd do that, so you'll just have to imagine a large cat on my prodigious belly.

But now there's no belly, but there is a baby.  An increasingly large and demanding baby.  How would Alot deal with such a thing!?! 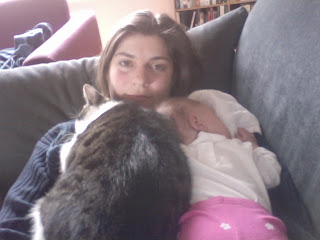 Boy am I glad I wore a sweater or I might have gotten chilly... oh wait...

I'd say he loves it here.  He bounds about, bouncing off of our fruit trees, climbing up the side of the house and coming in the upstairs windows - even if the back door is wide open.  I guess it's more fun?

He also is pretty fond of the Spawn.  If she's crying, he comes running to me.  This happens whether she's in her crib or in my arms.  Alot hears her yell and runs to me and begins meowing.  You could say that he's just begging me to shut her up.  I prefer to think he's a watch cat for the baby.

Then when I'm holding her or nursing her, he cuddles up next to me and purrs.  He puts up with her kicking him in the head.  He loves to watch us change her.  Preferably from the changing table itself, which means it can get a bit crowded up there.

The only time he's a little creeped-out by the baby is when she's on the floor, which is becoming more and more frequent.  He looks at her and looks at me and it's very much like he's saying "Mom, you dropped it!  You wanna pick it up or somethin'?" and then he retreats to a higher vantage point.

I'm fairly sure he'll get over it by the time she actually begins crawling. 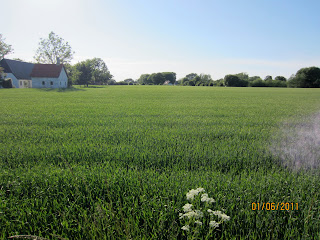 I took this right after he dove into the wheat field across the road from my home.
I swear there was a tail visible.  I just can't find it now.
Posted by Archaeogoddess at 2:04 PM

Email ThisBlogThis!Share to TwitterShare to FacebookShare to Pinterest
Labels: and we named him Alot, Archaeospawn