Welcome to "Pimp my Parlor."  Today we visit a small island in Denmark to visit a large house with an interesting problem.

There are too many rooms and not enough furniture.  The fools who live here don't even know what to call the first front room.  It's obviously a parlor, also known as a salon, or even as a drawing room if you want to spend the rest of your life explaining that no, you do not draw in your drawing room, very funny, idiot. 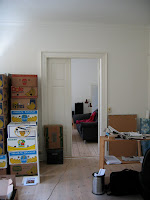 What it is not is a storage room.

Look at this mess!!

The husband in this house was using the room as a temporary office while working on his final project, since the internet is only accessible through one plug in the corner of the room.  The wife, for reasons that we can only imagine, she IS an American after all and we all know what THEY are like, is running cables across the floor and into the next room where she's taken up semi-permanent residence on the couch.


Thankfully, due to some mold, a deep-seated dislike of older furniture, and a last minute display of generosity, the couple was able to score some large furniture from the in-laws for free.  "Pimp my Parlor" was there to see the result.

They acquired the entire contents of the rectory dinning room: a carpet, and a set of furniture that included a table, chairs, and what's known as a "silver cabinet."

There was a total of 7 chairs, one of which was just slightly different from the rest.  There were also three extra seat inserts and it is the opinion of the wife that there were three other chairs at some point.  She even remembers seeing them in the attic.  They were slightly broken.  She's willing to bet that they were tossed rather than repaired.  This makes her feel slightly ill, so we did not press her for more information.  Four chairs eventually went into the dinning room to replace the unsightly chairs previously in use, though at the time of these photos several of the chairs do seem to be standing around looking embarrassed.  The other three chairs, including the odd man out, remained in the parlor around the table.

Since the home owners do not have any silver... well, we're sure they'll find a use for the cabinet.  They do seem to have a ridiculous number of books in boxes around the house.  However, "Pimp my Parlor" doesn't do libraries.

Also in the set was a massive sideboard.  The small secretary on the far right was an earlier acquisition from the same house, but not part of the dinning room set.

We later discovered that the third door to the sideboard was present, just not re-attached in time for our visit.

Really, they have no excuse now for having things laying about.  Like that advertisement sitting on the table.  Sheesh, good thing we aren't trying to sell this house!  You can see the staircase through these doors.  The wife says this may help some of the long time readers of this blog to orient the position of the parlor.  We at "Pimp my Parlor" prefer blueprints, but that set the woman off on this fit of "oh my god, I have been busy!  Danish doesn't learn itself!!" And so we left her alone.

Because of the odd number of chairs, the couple has cleverly used a large bench as the seat along one side of the table.

We see the advertisement has moved.  Thanks, overly excitable woman!

There was another smaller sideboard that came with this set, it went into the proper dinning room and resulted in furniture being rearranged in the office.  This didn't make much sense to us, but seeing how the wife was beginning to look a little frazzled, we decided to not make an issue of it, especially after her father-in-law had informed them, AFTER all the furniture was moved into the house, that the dinning room set did in fact come into smaller pieces, which might make it easier for them to move.

Apparently the couple was worried that they were breaking the furniture and so desisted from tugging on various bits and just carefully moved the furniture on rollers.  Across carpets.  Through doors.  (Doors in Denmark all have thresholds, even the interior doors.  The couple doesn't know why, but they are prepared to shoot the architect.)  Onto lifts.  Into moving vans.  Then they drove the furniture to the house on a narrow COBBLED street where, because there was very little room to maneuver the moving van, the couple constructed a BRIDGE out of a BROKEN BOOKSHELF so that they could roll the furniture out of the moving van, onto the lift, and then from the lift onto the bridge, over the front door step and then around the corner into the parlor.  In order to get this furniture, the couple had gotten up at 5 am and only completed all the moving at 2 am the NEXT MORNING.  Too bad there is no video of this event.

So when "Pimp my Parlor" showed up later that day, we quickly took the photos and ran away.  The poor woman was also in the middle of cleaning the kitchen because the chimney sweep had been to empty a chimney full of bird nests, leaving a thick layer of soot throughout.  Meanwhile, her husband had finished his project just before the Great Parlor Trick Move and ran off to do a taxi shift.

At the time this program aired, we were able to interview the woman, in a slightly more relaxed state.  Her husband passed his final project, he's now a Journalist For Real, and the kitchen is de-sooted and getting organized.  The garden is still a shambles and the internet is still only accessible in two rooms of the house, neither of which is an office.  But she is quick to point out, they are only one wardrobe, one bed and two mattresses away from having a completely furnished house.  If only life would slow down just enough to be able to organize it!
Posted by Archaeogoddess at 3:53 PM

Email ThisBlogThis!Share to TwitterShare to FacebookShare to Pinterest
Labels: my home