***EDIT***
Damn it, I hit post instead of preview a few hours ago, so you may be getting this again.  And again.  And again.  This is the one with all the pictures I could muster.  I'm just going to go bang my head on the table now.  Sorry Kelli, I deleted your comment when I deleted the old version of this post.  Thanks for liking the last photo!
***END EDIT***

The adventures continue in our garden.  Two things worth mentioning...

I am not a gardener.

Neither is my husband.

While most things we'll research to death before attempting (just ask my husband about his ongoing probe into trailers - we haven't the money to buy one, but when we do... oh my will we be prepared), for some reason "gardening" is not one of them.  We own at least seven books on wine, including grape varietals and regional production, numerous cook books and recipe collections, more books on the archaeology of the Middle Bronze Age in the Southern Levant than you could possibly want and not one single book on plants.  Neither care, nor maintenance, nor varieties (unless you count the grape book, but it notably states that growing grapes in Denmark for wine production is a foolish venture undertaken by nut-jobs with greenhouses - or words to that effect).

This has worked out fine because we ended up with some very lovely roses without doing a darned thing.

This is one of two large (taller than I am) rose bushes.  I think it's a little sick, there are black spots on the leaves.  But the roses are HUGE and AMAZING in their abundance.

Then there is this white rose bush.  There's a hammock in this picture that my husband temporarily strung up.

White rose on above mentioned bush.

We also have a red rose bush that looks pretty sad, apart from one beautiful rose and a few possible buds.

This is the last rose bush, it's got rather wild-looking roses, but absolutely no rose smell.

Look at THAT!  Pink and orange and the flower is about the size of my hand with fingers outstretched.  I LIKE this rose.  And since I have allergies, I shouldn't go around sticking my nose into roses to smell them anyway.

Then my husband got a large clipper for his graduation present.  And he got a little excited.

This was once on a bush.

This is what remains of that bush.

To be fair, I don't think that the bushes in our garden had been pruned in years and were a bit of a mess, but he's insisting that apart from one or two little slips, the branches had to go because they were "all tangly."

Would someone else like to explain to my husband that nature is often "all tangly"?

If only the garden had not been so over-grown!  Well, it's certainly not now.  Except for the rose bushes, who got a last minute reprieve by blooming so well.  I really don't want to cut them back as much as I know the Danish Boy would like (and now that he's got big manly clippers, he can).  *Sigh* I expect there to be a bit of a row over it in late summer after the blooms fall off.

I did insist that the lavender stayed as it was.  We compromised and he got to cut off one random branch, rather than the pruning he wanted to do.  Whoever planted the lavender planted another lovely plant RIGHT NEXT TO IT so now both are all up in each other's faces.

I'm rooting for the lavender.

I also absolutely love my foxglove plant.  I wish a had oodles more.  Did you know that the first year they don't bloom?  Means we probably pulled a bunch of them out thinking they were weeds.  Drat.

While my husband worked on de-vegetating the garden, I managed to get some good Alot photos...

This one screams "lolcat" - I mean, WHERE IS HIS HEAD?? 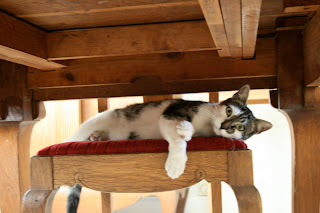 But this is my favorite.  I managed to catch him because I was sitting here at the table working on this G*D*MN*D F*CK*NG POST FROM H*LL when he decided to take a break on the chair.  He came in when I went out to get a few more garden pictures, he had been lurking in the (now much smaller) bushes, probably just waiting for the door to open.

Every time he comes in the house, he does the same thing: tours the house (including every window sill), scratches the carpet in front of the door, lounges somewhere for a few minutes, then wanders out a little while later.  I have a lot of Alot butt shots on my camera.  Sometimes I can get him coming at me, like the first shot.  Only if I can't get the camera to focus in time I end up with a close up blurred shot of his nose.

*** Post script to this post ***
I had a horrible time trying to get the images into this post.  Hours spent swearing and clawing at the air and pulling hair.  The reasons are two-fold.  One, there were so many photos, that it made the post ridiculously long and so I tried to do a flickr slideshow WHICH DIDN'T WORK - hours were wasted there, and secondly I had a very hard time getting the pictures to be placed where I wanted them to be and they kept wanting to turn into "links" and refused to let me write text next to them without dragging them down from the top of the post where they mysteriously moved after I de-linked them.  Leaving them as links did seem to work sometimes, but not others.  Not only that, but each picture took forever to upload.

I guess that's three-fold, not two-fold...

Either I need to post fewer photos or I need a different platform or I'm doing this all wrong.  Is there an idiots guide to blogger that I should know about?  Any suggestions on how to make this easier on myself?  I spent all day today on this post.  ALL DAMN DAY!  And now I'm hungry and have to cook myself something.  If you'll excuse me, I'll just go wallow in self-pity in the kitchen...
Posted by Archaeogoddess at 7:41 PM

Email ThisBlogThis!Share to TwitterShare to FacebookShare to Pinterest
Labels: Adventures in Gardening, and we named him Alot