This is the joy of Denmark, constantly being unable to ask people how to get home because you can't tell them where you live.

I think this is the real reason they invented identity cards in this small nation.  How else could the Copenhagen police know which train to put west coasters on?  It's not like you can understand the words that are coming out of their mouths.  I mean, jeez!

And at some point you *will* need help getting home.  Maybe because you've had too much to drink, but it's just as likely that you'll discover that the bus stops have moved and the buses have been rerouted and suddenly you shouldn't be taking the 15, because that no longer goes by your house, or stops anywhere near your house. In fact, the 15 now goes to Hamburg.

Which is in Germany.

And we don't go to Germany.

Unless we are buying ridiculous amounts of cheap snacks and liquor which would have cost us the same amount if we'd just gone to Bilka because we used half a tank of gas to get us to Germany and will use half a tank to get back, and petrol is viciously expensive in Denmark, but going to Germany to load up on crap reminds us why we fought the war.

Oh, and we go to Germany to visit Berlin.

But as we all know, Berlin is not *really* Germany.

So OTHER THAN THAT, we don't go to Germany.

Speaking of Germany, if I went to the south side of my island I might be able to see it, on a clear day.

Apparently, my associates tell me, I live in a foreign country and have worked in several other foreign countries, thus giving me OODLES more foreign policy experience that some people who have, in the past, may have run for certain public offices.

This island.  Under 7000 inhabitants.  Which still makes it a larger community than what I grew up in, shockingly enough.  You can only get here by ferry boat.  There are three ferry boats leaving from different cities and arriving in different cities.  This does mean that from time to time you race from one end of the island to the other trying to get on a ferry boat.  Important note if you ever visit me: make a reservation for your car.  We get weekenders.  *scoffs*

I have lived a good chunk of my life in tourist destinations.  This is because I share my parents philosophy of "why just visit a lovely place when you can freakin' live there!"

(They probably wouldn't put it that way, or they'd point out that they have other, more important philosophies like "be kind to others" and "please don't bring the car back without any gas this time" - but they did decide to move us all to a charming town in the country rather than raise us in suburbia because it is way more awesome to live in a beautiful place all the time, instead of living in a sucky place and only going to pretty places when you can.)

So I tend to have a bit of impatience with tourists and a certain smugness when it comes to where I live.  Add that to my irrational hatred of summer homes... and well, I'm an islander by nature.

My husband and I have had oodles of fun exploring the island.  We've been beer tasting at the local brewery, we've gone in search of the butchers so that I can get a shoulder of pork (not a common cut in Denmark, by the way) and we've been antiquing (which is very touristy, but also a great way to find out if you can afford to decorate your house... and the answer is NO).  We've found out that although we live on an island and a huge number of people living here are fishermen, you cannot buy fresh fish in any stores.  But some fishermen may be keeping some fish from their catches, which they aren't supposed to do, and these men may be willing to sell you some under the table, which they aren't supposed to do, but of course, no one really knows if this is *really* so...

For those who wonder, yes, there *is* a hospital on the island.  Somewhere around here.  I just had it a minute ago, must have set it down somewhere... forget my own head next...

We've discovered that we can get just about everything we used to be able to get in Århus, except some American foods (no SuperBest here) and I'm having an herbal issue, where I keep buying potted herbs and then eating them instead of planting them.

I feel strangely guilty about that.  I mean, I buy my chickens pre-dead, cut and packaged for my dining pleasure - why can I not get herbs the same way?  Having me buy herbs in a pot forces me into some big lie about how I'm going to take this potted herb home and care for it, give it a good life, nurture it.  When the reality is, I'm going to go home and pull it's little leaves off!  The herbs even come with little tags telling me how to care for the plant.  I tell you, it's just sick.  Now if I bought a bush of mint, it might last - although the care tag tells me that mint is not meant to survive in northern Europe and therefore needs plenty of sunlight - ohmygod, set me up for failure why don't you!  Denmark, sun?  WTF?!  But a small, scrawny mint plant is just not going to hack it in my house if I'm making a Jamie Oliver risotto (ever notice the man asks you to throw in handfuls of everything?).  The guilt is compounded by the similarity between the scrawny mint plant and the Christmas tree in the Charlie Brown Christmas special.  I feel like I should be swaddling the mint in a blankie and singing "Hark the Herald Angels Sing" at it instead of systematically stripping it of the ability to photosynthesize.

If you are also wondering if you remembered correctly that I get seasick... uh, yeah, I do.  Does this mean it's really rather silly that I live on an island that can ONLY be reached by BOAT... uh, yeah, it is. But I also hate flying and yet spend a lot of time traveling long distances by plane, have allergies and yet spend a lot of time outside, suck at learning languages and yet live in Denmark, etc.  If I avoided things I do not like or make me uncomfortable, I'd have to live in a lab somewhere in Kansas.  And never leave.

I shall now leave you with two photos of the town in which I live that I did not take.  Alas, the photos I seem to have taken of this island SUCK.  I'm going to have to do something about it, but not now.  Not while it's so cold the ducks have frozen to the sidewalk. 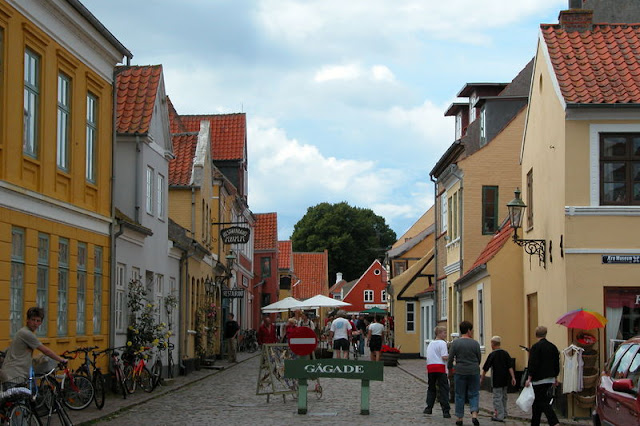 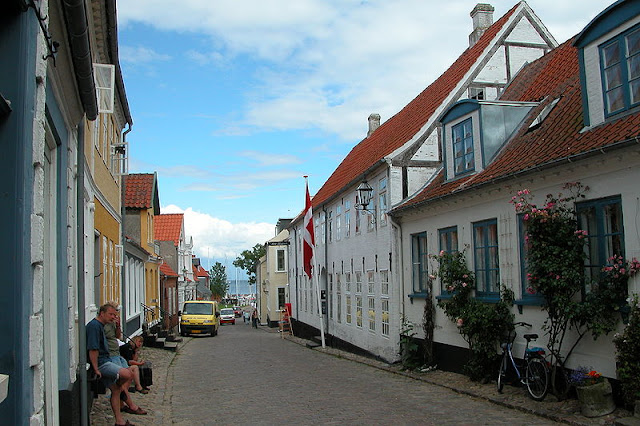 Posted by Archaeogoddess at 3:01 PM