Just want to get that out there.

I'm still in the hotel, there's been a bit of madness surrounding vehicles. From what I understand we got permission to have cars but no cars were set-aside for us. So we wait for transportation. Slowly the rest of the staff are moved out to site, those of us who do mapping or survey or registration are still sitting by the pool, drinking water and wondering if our bank accounts can handle one more shopping trip to the souk. Not much has happened apart from deciding that Doha is like Las Vegas. Without the alcohol. Or volcano. Or pirate battle. Or gambling. In fact, if you took everything that makes Las Vegas 'Las Vegas,' you'd have Doha. It's hot, there are palm trees, and big flashy cars and all the buildings are lit up at night.  And as you can see from the picture, there is a pyramid.  Most people siesta during the hot, so shops are open until late at night.

I've been scribbling in my calendar a sort of short diary so that when I got around to posting (can't cut into the pool time, you know, we could be desert bound at any time!) I'd have something to write about.

I give you: The Diary of the Archaeogoddess....

1 November: Arrived in Doha at 2:30 AM, while checking in, found out we'd be out by noon and there was a roof top pool. Went straight to pool with the other archaeologists checking in and dipped feet in water until 4 AM. Found out about 3 AM we were not leaving today. Yay!

2 November: Begin exploring Doha. City Center Mall is big. But not as big as the other mall that has a river with gondolas in it. City Center does boast an ice rink on the ground floor and a fun park on the roof. Spent the rest of the day by the pool. Several archaeologists bought snorkels and are trying them out.

3 November: Another pool day. Back to the mall. We then hit the souk (it's reconstructed, so the nicest cleanest souk EVER) and bought tickets to the England v. Brazil game on the 14th. Volunteered to go live in a tent on site instead of in a house. Still didn't get me out of the hotel. 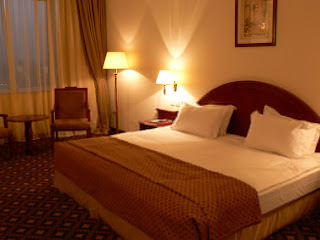 What my hotel room looks like.  Sorta.  Without all the mess.

4 November: Got one car, so they are taking people out to the site. Sat by the pool. Hit the souk. Pondered buying a parrot. Plan on having pirate v ninja battles one night. Plot avoiding anyone with a phone so a couple of us can stay by the pool.

5 November: Wonder where we can get fireworks. Guy Fawkes day, you know. Back to the souk. Check out the Islamic Culture Center. Realize I haven't been to the Islamic Art museum. Oh, well, there's always the weekend. Complete acclimatization and get cold at night when the temperature drops below 30 C. The pool at 27 C (80 F) is just too cold to swim in. Freak out every time someone comes up to the pool. Five of us plan on jumping into the pool and holding our breath until whoever it is that has come up to tell us to pack goes away. We make it another day. At dinner we're told we'll all be leaving on Friday.

6 November: Breakfast. I'm packed and ready to go. Told, no, you aren't, you're here until probably Sunday. But they are taking two of our little hotel club. That leaves five of us. Five lonely souls in this massive hotel. And I'm going to have to unpack again. Drat. At this rate we'll be in the hotel until the football match! And we're all going to get fat from the buffet meals. Three a day. They'll need a forklift to get us out. I finally agree to housekeeping. I need to have my instant coffee restocked.

So that's it. That's what I've been doing. Alternating between getting antsy to get out there and desperate to stay. Boredom is slowly setting in and so is poverty, but being well fed and clean for so long, as well as sleeping in a massive room! Well... hard to argue with that. The muzak in the dinning room will eventually drive us out, but not before we all gain 5 kg from the rampant dessert table!
Posted by Archaeogoddess at 9:28 AM

Email ThisBlogThis!Share to TwitterShare to FacebookShare to Pinterest
Labels: Q-Zone